Welcome to our galaxy 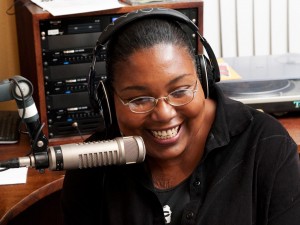 I had no idea that an accidental turn of the dial in the early 1990’s would completely change my life! That serendipitous event turned me into an avid listener of WWOZ, and then to an off-air volunteer, an on-air sub, then a full-fledged show host and, finally, a full time staff-member. WWOZ opened up my ears to a galaxy of different kinds of music - I eventually learned to appreciate some genres that I didn’t particularly care for before WWOZ.

During the early to mid-nineties the staff was still very small and we wore many hats. I performed the duties of an Assistant Operations Manager. Eventually, as Operations Manager, I also did the work of a Music Director, a Program Director, a Volunteer Coordinator, an Underwriting Rep, an Event Producer, and started the station’s first youth in radio program with volunteer Beverly Kilbourne. We called this group "Original Minds." Back then, you can’t possibly imagine how difficult it was to raise funds during our membership drives!

After Hurricane Katrina and the federal flood of 2005, WWOZ temporarily relocated to Baton Rouge and was lodged in the Louisiana Public Broadcasting Building. I then spent time in Houston, Texas and Montreal, Canada but returned to the Crescent City and to WWOZ as a temporary assistant to the General Manager. Little did I know that I would finally find my calling as the station’s first-ever full time volunteer coordinator. For 26 years, I’ve lived through and watched WWOZ’s evolution from a little station operating on 4,000 watts to a pioneer in internet broadcast. It’s really been an extraordinary journey! I am grateful to have met so many fascinating volunteers, musicians, writers, composers, artists, activists, and leaders.

We are where we are today, the flag bearer of New Orleans Music and Culture around the world, because of the creativity and hard work of volunteers and staff. In turn, WWOZ is here today thanks to the loyal support of our contributing members— that means YOU! Thank you for joining us in this calling to help preserve the music and unique culture of New Orleans through the collective power of community radio!