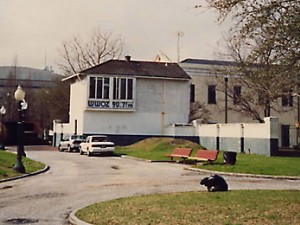 Probably the most endearing anecdote about the early days of WWOZ is how the station operated out of the upstairs beer storage room at Tipitina's, where the DJ would drop a microphone through the floor and send the live music below straight to the airwaves.

But station co-founder Jerry Brock wants to be clear: the people who brought us WWOZ definitely knew what they were doing.

WWOZ went on the air as New Orleans' community radio station in 1980, after years of work from dedicated volunteers and music lovers, led by brothers Jerry and Walter Brock.

The Brocks discovered community radio in Texas, and came to New Orleans in the 1970s. They brought their huge record collections with them, with a mind to create a radio station reflecting local culture. The FM stations in the U.S. were being snapped up quickly, but with the help of community radio pioneer Lorenzo Milam, the Brocks were able to secure the 90.7 FM frequency. The call letters WWOZ reference the Wonderful Wizard of Oz, specifically the line, "Pay no attention to the man behind the curtain." The content would be the focus of the station.

The Brocks had heard New Orleans music in recordings from Jelly Roll Morton to Dr. John, but were amazed to find a vibrant live music scene in the city's streets and night clubs. At that time, Brock says, local music was barely heard on the radio, except maybe a few songs around Mardi Gras.

The brothers got to know local artists through new friends like Rickie Castrillo, a musician and stage manager at the club Rosy's. He knew and played with Irma Thomas, Earl King and other R&B greats. Legend Danny Barker helped bring the traditional jazz community into the WWOZ fold.

At the same time, the station still needed a broadcast permit. The Brock brothers formed the non-profit Nora Blatch Educational Foundation to hold the station's license, named after a female engineer and radio pioneer. They then had to negotiate a complex and contentious federal licensing process. After four years of fundraising, ground work, paperwork and legal hearings, the license was finally awarded.

On December 4, 1980, the federal permit was granted and WWOZ had to be on the air within 24 hours. The station still didn’t have a physical home. All the gear was in storage. The transmitter and antenna had already been installed and tested at the tower, in Bridge City, Louisiana. They started at 25,000 watts of power (compared to 100,000 watts today). For the first few weeks, the Brocks and others would tape programs at home and race out to the transmitter shack to get ‘em on air.

Engineer Ken Devine was instrumental to the station in these early days, as was jack-of-many-trades Eric Glaser. Together with the Brocks and other volunteers, they set up shop in the space above Tipitina's, founded just a few years earlier.

For the first months on air, the staff would indeed occasionally lower a mic through the floor into the club, recording live music for broadcast. There were times when 'OZ hosts would set up in Tip's to interview the performers before their set began. Within six months, Brock says, the station got its first real broadcasting equipment and the ‘OZilians went on-air in a slightly more refined manner.

Early ‘OZ supporters included local luminaries like Al Rose, Ellis Marsalis, Kidd Jordan and Bunny Matthews, who all did extensive work with the station before it even went on the air.

Show hosts like the Duke of Paducah brought in Ernie K-Doe and Dave Bartholomew for interviews and performances. Earl King was a regular at the station, and James Booker was featured one Saturday afternoon at the piano from the stage at Tip's, telling stories from his life between songs.

Soon Bobby Mitchell and Ernie K-Doe had their own weekly programs ("Burn, K-Doe, burn!"). Friends and families of musicians often would call to say thanks and sometimes to add to or correct what the record collectors were saying. An 'OZ family grew, as an extension of the community of New Orleans.

The definitive New Orleans music history Up From the Cradle of Jazz calls WWOZ "the most exciting broadcast development of the 1980s," as it "became a kaleidoscope of voices, rich in oral imagery — jazzmen, composers, Cajun fiddlers, parades, grand marshals, gospel artists and R&B bluesmen, writers, occasional filmmakers, historians, Mardi Gras Indians, fathers and sons and mothers and daughters of musical families. WWOZ provided intimacy between the musicians and listeners, immeasurably broadening the sense of place."

In 1984, WWOZ moved out of the cramped space above Tipitina's and into a 3-room wood building in Louis Armstrong Park, part of the Tremé neighborhood. From here, DJs heard the sounds of school marching bands tooting their horns and beating their drums after class, and they roosted close to the music clubs and street performers of Rampart Street and the French Quarter.

By 1987, the financially-strapped Nora Blatch Foundation, which had established WWOZ in 1980, turned the station's license over to the Friends of WWOZ, Inc., a not-for-profit 501(c)(3) corporation established by the New Orleans Jazz & Heritage Festival Foundation for the purpose of operating WWOZ. Since that time, the Foundation has been the guarantor of WWOZ's financial and operational stability.

The Foundation has been a key player in making it possible for the station to grow from a compelling idea, struggling to realize its potential, to a widely-recognized and respected platform for supporting and nurturing the local music scene.

It has become an integral part of WWOZ's identity, and the station is well-known for its live Jazz Fest broadcasts. The station and the foundation have grown together to become strong forces for promoting New Orleans' local culture to the world.

As the 1980s came to a close, WWOZ was beginning to be established as the broadcast voice of New Orleans. Yet, there was still much work to be done in order for WWOZ to fulfill its mission to bring New Orleans music to the Universe.

This article was based on an interview with Jerry Brock and comments submitted by Walter Brock.