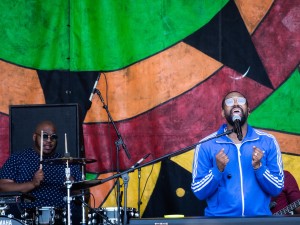 Congratulations to all of the 2023 Grammy Award nominees, especially those from Louisiana and the Gulf Coast!

Aaron Neville and the Dirty Dozen Brass Band's song, 'Stompin' Ground,' from the "Take Me To The River: New Orleans" soundtrack, is nominated for Best American Roots Performance. Terence Blanchard's groundbreaking Fire Shut Up In My Bones, the first opera by a Black composer to be presented at the Met, is nominated for Best Opera Recording. Zydeco artists Nathan & the Zydeco Cha-Chas and Sean Ardoin are both nominated for Best Regional Roots Music Album. Nicholas Payton's New Standards Vol. 1 is up for Best Jazz Instrumental Album. Big Freedia's contribution to Beyonce's single 'Break My Soul' has earned her credit as part of Beyonce's Album of the Year nomination for Renaissance.

Congratulations to all the artists with Louisiana ties and fingers crossed for y'all to win! The 65th GRAMMY Awards will air February 5, 2023 starting at 7pm CT on CBS and Paramount+.