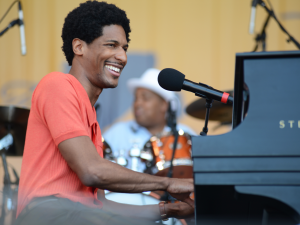 Jon Batiste entered the Grammy Awards with a record-breaking 11 nominations, the most for a New Orleans artist ever. And he won big-- Batiste is coming home with five Grammys, including the prestigious 'Album of the Year,' for We Are. During his acceptance speech, Batiste said, "I love music. I've been playing since I was a little boy. It's more than entertainment for me. It's a spiritual practice."

We Are features contributions from many other New Orleanians, including Trombone Shorty, Hot 8 Brass Band, PJ Morton, The Gospel Soul Children, Craig Adams, and St. Augustine's Marching 100 (Batiste's alma mater, along with NOCCA).

Batiste also won 'Best Music Video' for 'Freedom,' which was mostly shot in the Marigny, 'Best American Roots Performance' and 'Best American Roots Song' for 'Cry,' and 'Best Score Soundtrack For Visual Media' for his collaboration with Trent Reznor and Atticus Ross on the animated film Soul (tied with the score for The Queen's Gambit).