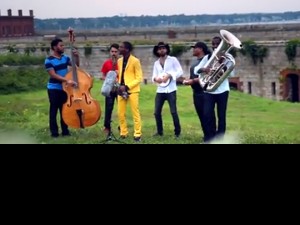 After playing a set at Newport, [Jon Batiste] and the Stay Human band kept walking. They walked past the backstage trailers, through the quad stage, and up onto an overgrown rampart of Fort Adams — the 190-year-old edifice which houses the festival. After a long day of travel, interviews and a headlining performance, they were there to give us a special and private encore.

They chose the tune "Believe In Love," which Batiste voiced with a tender edge and a melodica. Appropriately enough, the keyboardist and bandleader calls his portable performances "love riots": attempts to generate instant community through music. Then, having done their best to share said love with our cameras, the six musicians started walking again, into the crepuscular haze and out of sight.