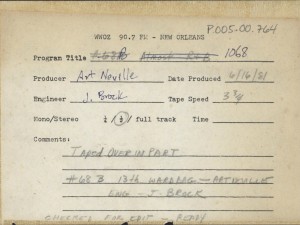 In the summer of 1981, WWOZ founder Jerry Brock engineered a 90-minute WWOZ program, hosted by a then 43-year-old Art Neville. It was called Art Neville's 13th Ward Bag, in acknowledgement of the neighborhood where he and his brothers had grown up, and Art still lived. The show was recorded at the WWOZ studios above Tipitina's, which looked out over the 13th Ward across Napoleon Avenue in uptown New Orleans. This was less than a year after WWOZ first went on the air.

Art played a mix of music he was connected to in different ways: the Neville Brothers, the Meters, the Hawkettes, Chuck Willis, Wild Magnolias, Alvin Shine Robinson. He played some rare, unreleased items as well.

The show was recorded on reel-to-reel tape at 3-3/4 ips, in stereo. WWOZ, at that time, was mostly broadcasting in mono. It aired at least twice that summer.

The tape eventually was included in a large deposit to the Archive of the New Orleans Jazz & Heritage Foundation of about 1,300 reel-to-reel tapes of early WWOZ programs. The tapes were eventually stored in a climate-controlled facility, and after Hurricane Katrina, a grant from FEMA enabled the Archive to digitize them.

After Art Neville passed on July 22 of this year, WWOZ decided to find a special way to share this program in its entirety with listeners, and reached out to Jerry Brock to speak with him about the recording, which he remembers well. He will be in the studio on Wednesday, August 28, from 2-4p to present the tape of Art Neville's 13th Ward Bag on the air for the first time since 1981, and also to speak about Art's relationship with WWOZ in the early days and just what the recording represents.

WWOZ show host Soul Sister, a.k.a. Melissa Weber, who is also now the curator of the Hogan Jazz Archive at Tulane University, will be joining Jerry on the air as a co-host.

"Art’s approach as a deejay also attests to his work as a sound engineer, recording artist, record producer and discerned listener," said Jerry Brock. "He purposely shared material that he knew had never been released. I’m certain that Art wanted to sit in his home or drive in his car and hear these recordings over the medium of radio as part of his own research and study of sound recordings and work as a WWOZ volunteer program host. There was Art, the always student, open to learning, new ideas and new approaches."

Brock continued, "If Art had produced more than just this one radio program he would have grown more comfortable, loosened up some and probably become one of the most gifted programmers to ever emerge from WWOZ. His previous commitments to his family and career didn’t allow him this opportunity but he knew the door was always open and he continued to support the radio station for many years."

"Rebroadcasting this unique moment in WWOZ's history is a great way for us to give listeners a special window into Art Neville's personality and love of music," said WWOZ's General Manager Beth Arroyo Utterback. "And it reinforces our feeling that Art was a member of the WWOZ family -- he wasn't just a great pillar of New Orleans music, he was even a WWOZ show host! He was one of us. And we're thrilled to have the legendary Jerry Brock, one of our founders, who engineered the original recording, on hand to share this with the world."

"This a great example of WWOZ's ongoing close relationship with the Archive of the New Orleans Jazz & Heritage Foundation," said WWOZ's Director of Content Dave Ankers. "This recording is one of thousands from WWOZ's long history that have been collected, preserved, and later digitized, so that these important moments aren't lost. And as a result we can bring you back to that Sunday morning with Art Neville above Tipitina's, almost forty years later."

Listen live to hear it on WWOZ this Wednesday, August 28, 2019 at 90.7 FM and or online at wwoz.org. It will also be available to play back again on WWOZ's online 2-Week Archive for 14 days afterwards.