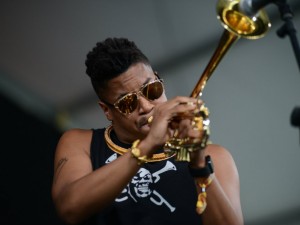 The nominations for the 2019 Grammy Awards are out and many Louisiana artists are up to receive big honors. Nominees with Louisiana ties include Cha Wa, PJ Morton, Terence Blanchard, and Christian Scott aTunde Adjuah.

Christian Scott aTunde Adjuah is up for best instrumental album with 'The Emancipation Procrastination.'

Mardi Gras Indian band Cha Wa is up for best regional roots music album, the same category Louisiana-based Lost Bayou Ramblers won in last year for their album Kalenda. Cha Wa's album is entitled Spyboy. They will be competing against southwest Louisiana's Sean Ardoin and his Kreole Rock and Soul.

Best of luck to all of the Louisiana nominees! We're pulling for you. Below, check out recent WWOZ videos from Cha Wa and Terence Blanchard!