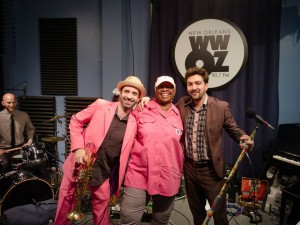 Every year, WWOZ releases a new CD, capturing some of the best sounds of New Orleans and what we’ve been up to the past few months. This spring is no different with the release of CD #45, Back In the House. Back In the House is something special, filled with some exhilarating performances by Herlin Riley, Khris Royal, and Irma Thomas playing together with Flow Tribe, and was recorded live for your listening pleasure. This 11-song compilation features select live performances recorded at WWOZ from the two 2016 pledge drives. As always, this CD is available only to new or renewing WWOZ members during the Spring Pledge Drive who pledge at the $120 level or above.

Back In the House opens with Gregory Agid’s fiery performance of ‘Mystery Blues’ showcasing Agid’s energetic clarinet skills combined with Josh Starkman’s stellar guitar playing. Irma Thomas teams up with Flow Tribe on the next track coming together for a version of ‘Proud Mary’ that is bouncing with energy and is no doubt one of those unpredictable moments that always accompany an ‘OZ pledge drive. ‘Sweet Lorraine’ from the 504 Experience featuring Gerald French features crisp, but smooth vocals and a bright melodic trumpet.

Unapologetically bringing the funk, is Khris Royal & Dark Matter performing ‘Step Children,’ features stabbing horn lines and a punching bass line that drives up the energy. It is the second single that is part of an ongoing singles series, and marks his first new material with Dark Matter since 2011. Stephen Malinowski is featured on solo piano for a rip-roaring version of ‘Rampart Rhumba’ recorded during the Spring 2016 Pledge Drive (video below).

The soulful rhythm and blues sounds of Eric Lindell are calming with his call of togetherness through ‘Sun & The Sea’ originally from his 2016 release entitled, Matters of the Heart. Dana Abbott provides a soulful and gutsy rendition of ‘There Goes My Baby.’ The album concludes with two traditional jazz songs included John Zarsky & Trad Star performing a version of Jelly Roll Morton’s ‘Georgia Swing’ where the muted horns still soar over the rhythm of the banjo and upright bass; the New Wave Brass Band’s version of ‘Paul Barbarin’s Second Line’ provides a bouncing and swinging conclusion to Back In the House that’ll leave the listener inspired and hungry for more sounds of the Crescent City.

How’s all that sound? Well, you can have this in YOUR hand simply by becoming a Guardian of the Groove with a  $10 (or more) monthly or $120 one-time donation to the station. At this level, you'll receive CD #45, an 'OZ bumper sticker, and a membership card that gives you discounts at many local businesses.