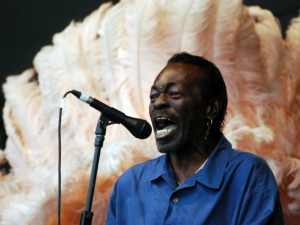 In this series, we're featuring classic Mardi Gras songs and the stories behind them.

This episode delves into Wilson 'Willie Tee' Turbinton's and Big Chief Bo Dollis and the Wild Magnolias song 'Handa Wanda' through conversations with the men, now both deceased.

In 1969, Jazz Fest co-founder Quint Davis attended a White Eagles Mardi Gras Indian practice to record that tribe's Big Chief, but discovered another voice while there-- Bo Dollis. He requested Dollis make up a song that hadn't been sung before on Mardi Gras Day. Dollis said, "Well, I'll try," and went home to pen the now-famous 'Handa Wanda.' "[It was] pretty much a traditional thing that guys had been singing on the streets since the beginning of time."

"Handa and Wanda," Dollis simply said of the writing process. "They go together."

Producer Willie Tee put together band that accompanied Dollis and The Wild Magnolias in the studio. The song was recorded in Baton Rouge and marked the first time that Mardi Gras Indians performed in the studio with a full band backing them up. "It was magic. There wasn't any boundaries on what could happen with it," said Turbinton."Where it comes from is your experience on Mardi Gras Day. You think of things, sometimes, of what the old guys used to sing; you can feel it. You gotta get something that you can feel."

Listen to the full piece on this Mardi Gras Indian classic below.