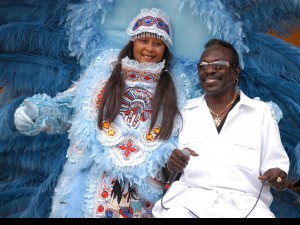 The Wild Magnolias outside NOMAF offices on St. Joseph's Night 2014 [Photo from NOMAF]

New Orleans and the Mardi Gras Indian community took a hit this year with the loss of Big Chief Bo Dollis in January. Now, just a few short months after his death, the New Orleans Musicians Clinic & Assistance Foundation has announced the establishment of the NOMAF Bo Dollis Memorial Fund, a donor advised fund, designed to help sustain the wellbeing of current masking Mardi Gras Indians. This important endeavor helps support the Mardi Gras Indian tradition by supporting the Indians themselves.

Masking usually involves significant personal financial and time outlay from the Indians in order to create their incredibly detailed suits. The Indians appear at numerous street events around the city throughout the year and are often not paid for their time-- but bring immeasurable value to the cultural atmosphere of New Orleans and enjoyment to all who see them. The fund will provide a source for today's Indians to fall back on in times of hardship. Assistance will be available to masking Indians once a year and applicants will go through an advisory board for situational assessment.

Dollis, who was involved with the clinic since its founding in 1998, was the organization's Honorary Donor Appeal Chair in 2013 and a vocal supporter of the clinic's mission even through his own health problems. He had countless contributions to the Mardi Gras Indian culture over his lifetime, and was a big part of the evolving the Mardi Gras Indian traditions since the 1970s, encouraging Indians to carry themselves well and act with pride and dignity. The fund hopes to continue his work as a community leader.

Big Chief of the Wild Magnolias tribe for decades, Dollis was one of the first to bring Mardi Gras Indian music to the world outside New Orleans. The Central City gang had been around since the 1950s but it was not until Dollis became Big Chief that the Wild Magnolias went from the streets to international fame. Throughout the 1970s and 1980s, the Wild Magnolias performed at locations like Carnegie Hall, the Smithsonian Folklife Festival, the New Orleans Jazz & Heritage Festival, and many other revered spots across the globe. He was named a National Endowment for the Arts National Heritage Fellow in 2011.