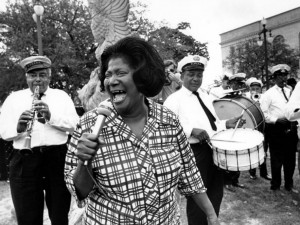 Mahalia Jackson 'Moving On Up A Little Higher' 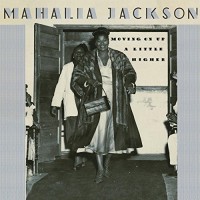 A new release from Mahalia Jackson features 11 previously unheard tracks discovered through research at The Historic New Orleans Collection. Moving On Up A Little Higher was released by Shanachie Records in late September 2016 and produced by Anthony Heilbut, a respected record producer, author and gospel expert based in New York.

Heilbut had been on the hunt for rare Mahalia Jackson tracks for decades for an album release. A gospel enthusiast from Ohio, Glen Smith, who was doing independent research at the Historic New Orleans Collection, stumbled upon just what Heilbut was looking for. The men collaborated and the songs from the reel-to-reel tapes are now reaching a wide audience.

“This was a long, long project, but it was very important to me,” Heilbut told the Advocate's Keith Spera in December. “I spent many years frustrated that so much of Mahalia had not been documented. I think these are some of her greatest performances.”

Jackson passed away in 1972 at the age of 59 or 60 but has long been known as the Queen of Gospel. She refused to sing secular music throughout her prolific and highly respected career. Jackson brought deep emotions to the music and frequently alternately brought audiences to tears and their feet.

The other 11 tracks on Moving On Up A Little Higher were gathered from a variety of sources, including the Library of Congress and private collectors. The recordings from the Library of Congress include Jackson's powerful performance at the 1957 Newport Jazz Festival. The overall feel of this album is much rawer than most of the material currently available from Jackson.

For more behind Jackson's impressive career, background, and the pieces that brought this record to fruition, check out this article.

Moving On Up A Little Higher is available on CD and mp3 from Amazon, iTunes, Google Play, and all the finer record stores near you.