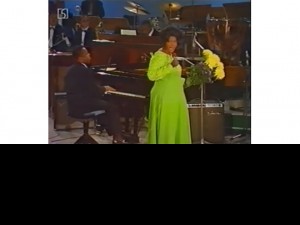 As the emcee puts it in his introduction, here's "the world's greatest gospel singer, Miss Mahalia Jackson" with and epic two-part rendition of "Come On Children Let's Sing" recorded in Berlin in 1967 for West German television. There's a cut at the 3:15 mark to the encore section of the performance (note the yellow flowers), in which she offers a second take on the song.