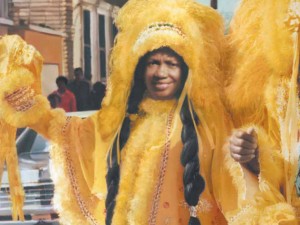 Miss Mercy, Big Queen Mercedes Stevenson of the Wild Tchoupitoulas [Photo provided by Miss Mercy]
Mercedes "Miss Mercy" Stevenson is one of the first Big Queens of the Wild Tchoupitoulas Mardi Gras Indians, founded by legendary vocalist George "Jolly" Landry. The early Wild Tchoupitoulas Queens wore headdresses, carried fans, and liberally added velvet, marabous, and beadwork to their dresses.
Sewing suits and costumes for Mardi Gras is a tradition that sustains strong bonds. "Miss Mercy" sewed her own suits and suits for other queens, family, and friends. After the death of Big Chief Jolly, Mercedes became a driving force in keeping the group alive. Reflecting on her experiences, "Miss Mercy" noted that Mardi Gras Indians have gained broader community recognition. She is delighted that the police are not as "hard on the Indians" as in the past.
In 2015, she sat down at WWOZ's studio for an interview with Karen Celestan to talk about her traditions.
Big Queen Mercy passed away in August 2016. Her funeral will be held Saturday, Aug. 20, at Austerlitz Street Baptist Church (819 Austerlitz St.). Viewing will begin at 9a, services at 10 a.m. She will be interred at the St. Patrick Cemetery and Mausoleum and honored with a traditional jazz funeral.

Update Required To play the media you will need to either update your browser to a recent version or update your Flash plugin.
Topic tags:
Mardi Gras Indians, In Memoriam 2016