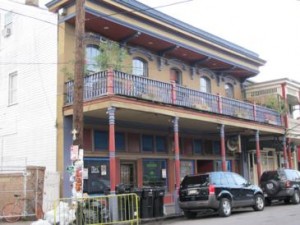 The Blue Nile has carved out a unique niche in the Frenchmen Street scene with its wide variety of New Orleans music.

The Soul Rebels launch their summer 2022 touring season with performances at clubs, theaters, pavilions, amphitheater and festivals national-wide. Touring will include performances on the Trombone Shorty Voodoo Threauxdown Tour, concerts with George Clinton and much more! Multi award-winning New Orleans rapper/singer Alfred Banks has garnered acclaim from some of hip-hop’s most esteemed publications. In addition to being named one of Complex’s 10 upcoming New Orleans MCs, Banks has been featured prominently on The Fader, HipHopDx, Okayplayer as well as DJBooth’s list of Top Indie rappers from Louisiana. Most recently, he completed three legs of a North American tour with the Grammy-nominated Tank & the Bangas. His 2019 collaboration with the internationally acclaimed powerhouse band The Soul Rebels, “Greatness,” was the televised NCAA tournament anthem. Burning Sands, the 2017 Netflix film executive produced by Oscar winner Common, featured Banks’ “UnderDogCentral” on its soundtrack.
https://www.bluenilelive.com/calendar-tickets