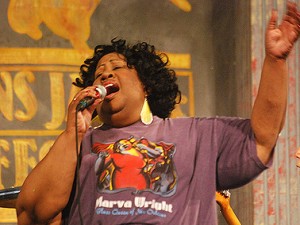 Marva Wright, the Blues Queen of New Orleans, passed away March 23 at 6 a.m. after suffering the last in a series of strokes.

With a powerful voice and a generous helping of personality, Marva sang bluesy Louisiana music with deep roots in gospel. From her early church singing and the beginning of her professional music career in 1987 to performances at clubs and festivals all over the world - and even a 1994 show at the White House - Marva's music-filled soul shone through with every note she sang.

Influenced by her mother (a gospel pianist/singer) and Mahalia Jackson (a family friend), Marva made her first recording, "Mama, He Treats Your Daughter Mean" in 1989. She debuted on national television in 1991 for a Super Bowl special, and made her first album, Heartbreakin' Woman, later that year. She went on to sing backup for artists including Allen Toussaint, Glen Campbell, and Joe Cocker, and performed with Harry Connick Jr., Bobby McFerrin, Aaron Neville, Fats Domino, Lou Rawls, and Marcia Ball, to name a few.

Marva has garnered numerous honors, including Big Easy and Offbeat awards, but perhaps the most important one is the special place she has earned in the hearts of blues fans here in New Orleans and around the world.

Special thanks to Quint Davis, Festival Productions, and the Jazz and Heritage Foundation.

I remember going into the school's office on the first day of my sophomore year, recently arrived in New Orleans, and being greeted by a gorgeously smiling lady. She noticed how nervous I was, but sent me to the right classroom with lovely gestures and basic words that were easy to understand. I was later surprised to find she sang like few creatures can, belting out the national anthem every time we had assembly.

That was Marva Wright, back in the mid 80's, when I was a student at McMain Magnet and she was about to unleash her career on us.

We have lost a truly gracious singer.

What a voice....it could stop you dead in your tracks or make you wanna dance.

You will be missed

She was the only singer to ever "HURT" (one night at the old Rock and Bowl) my ears! I fell in love with this wonderful talented woman that night and will truly miss her.

I remember seeing Marva at the Maple Leaf after her Christmas CD came out. During a break she autographed my copy and we had a nice discussion about her music and how it had affected my life. I'm so glad I had the opportunity to express my appreciation to this warm, womderful and talented artist. She will be sorely missed.

Undoubtedly, Marva Wright has been the undisputed 'Blues Queen' of New Orleans.
Many fans will miss her presence and incredible pipes.
I saw her countless times. But the time I remember the most vividly was at the now defunct Muddy Waters on Oak Street across from the Maple Leaf. She was on her game, vibrant, full of vitality and life, and absolutely belting out every song with conviction.
That was 15 years ago, and I can still remember it to this day.

Marva, know that you will not be forgotten. Your life will be celebrated!
I look forward to hearing about the second line I assumed will be planned in your honor.