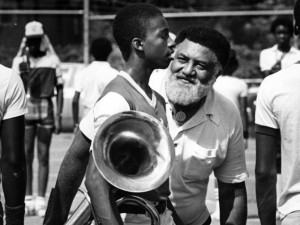 St. Augustine High School's legendary "Marching 100" is mourning the loss of its esteemed founder and long-time band master, Edwin Hampton, who passed away peacefully on July 21. He was 81 years old.

Arriving at the school in 1952, Mr. Hampton immediately set about starting what would become a world-renowned and hugely influential marching band, which he continued to direct until his retirement after Hurricane Katrina.

Hampton's success with the band is largely the product of his innovative and exciting marching style, which emphasizes military-style discipline and precision. As a result, the Purple Knights of the Marching 100 have gone far beyond the confines of their New Orleans high school, performing for popes and presidents in arenas and parades around the country.

The man who set the Marching 100 in motion will be greatly missed by the thousands of students he taught over five decades, including stars like Grammy-winning trumpeter and film composer Terence Blanchard.

We at WWOZ salute Mr. Edwin Hampton for his profound contribution to our New Orleans culture and enriching the lives of countless young men and women who came under his tutelage.

Watch a video of the Marching 100 in action:

St. Aug is my favorite band among our Catholic League rivals. At football games, they played the latest tunes currently on the radio along with dynamic halftime shows. They were the band I wished we could be. And my spirit was lifted to see them at the 2006 New Orleans Bowl, post-K. I knew there had to be an outstanding man behind all the accomplishments. My highest respects to Mr. Edwin Hampton.