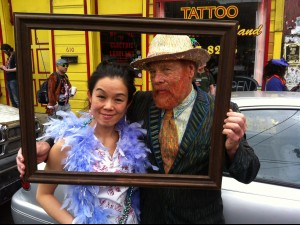 Artist Al Guarisco and May Lang

May, Jelly Roll and Kevin.JPG

This had to be one of the best Mardi Gras Parties ever --- Society of Saint Anne simply hit all the high notes and nothing was in a minor key!!!  And the international flavor was absolutely spectacular meeting people from Japan, China, France, Italy, Brazil, Mexico, South Africa, Canada, and on and on.

Each year one or more creative persons blow me away not only with their imagination, but the ability to take a fascinating concept and bring it to fruition.   One of the "Best of Show" was the self-portrait of Vincent van Gogh (Dutch) done brilliantly by Al Guarisco (Italian) joined in the frame by May Lang (Hong Kong) and photographed by Kevin McCrea (Boston).  The back of Al's ("Vincent's") coat was filled with "Starry Night" to boot!!

The Jelly Roll intended to be the Pope again --- but he (the real one) QUIT!  So we threw open the trunk and voila! --- an Afghan in a karokul hat and a wedding shirt from Nuristan province.

Can't wait for next year's laughter and joy.  Now let's get into a romantic mood.

We'll celebrate Valentine's Day with songs of love and amor.

I Wish I Was In New Orleans.

Here's my cover of this song by Tom Waits: https://sites.google.com/site/tomwaitsiwishiwasinneworleans/