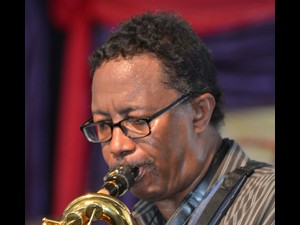 Tim Green at Jazz Fest 2014. Photo by Kichea S. Burt.
We were very sad to hear the news of the passing of New Orleans saxophonist Tim Green. He worked with countless musicians in the city over the years.
He also served as WWOZ's Station Manager in 1988.
Our thoughts and best wishes go out to his family and friends.
Funeral services will be head at noon,  September 3, at the Mausoleum of the Mt Olivet Cemetery, 4000 Norman Mayer Ave. A musical celebration of Tim Green's life will be held from 3 to 7 pm September 3 at Cafe Istanbul, inside the New Orleans Healing Center at 2372 St Claude Ave.

Tuesday afternoon as I was leaving WWOZ, I saw Tim Green at the French Market Café.  He had played all day with Sugar Bear and his Jazz Cats and now appeared to be on a break.   Sitting on a bar stool, horn still poised in his hands and facing the back of the Joan of Arc statue, his face was solemn.  He seemed to be staring deeply into the past, or, perhaps, trying to make sense of something in the future.  He didn’t see me when I waved, so I continued on my way, thinking that I should call him later….   On Thursday night my husband Don and I got a call from Cyril Neville whose voice was trembling with emotion as he shared that he felt “numb” because he had just gotten some terrible news--Tim Green was found dead at his house that evening.
I am now haunted by the figure of Tim Green around New Orleans—I see him now very clearly--the very first time I encountered him as a performer….  It was at the newly renovated Showcase Lounge many years ago before Katrina descended on the Crescent City.  That night at the Showcase, reserved and soft-spoken Tim Green was suddenly transformed into a mythic monster before my eyes.   I saw him commanding, pushing out sounds, feelings, and entire galaxies of “truths” from his horn.  He appeared to be electrified by some force from another dimension—he was caught up in a trance, possessed.  I saw him playing with a force and reverence that only priests and priestesses bring to the Altar of the Almighty.
And I see Tim Green driving a mint-condition Model-T Ford that he had restored.
And I see Tim Green, the former manager of WWOZ in the mid 1980’s, in his duties in the early years of New Orleans' radio-station for the blind, WRBH, the middle1990’s.  During one of our phone conversations, Tim told me how he and a small group of volunteers had found the building that now houses WRBH, raised the funds to purchase it, and how he had pressed to renovate and pay for it in five years.
So I see Tim Green on-air in the state-of-the-art facility that was WRBH in the mid 90’s.  The station was having a fund-drive to offset some expenses when Belle “Brown Sugar” Moore, then of WWOZ, said, “We should go help Tim out.  He’s tryin’ to raise some money for the station.”  So Chief Engineer Damond Jacob and I got into Belle’s car and drove to WRBH on Magazine Street.  Tim was surprised and deeply moved to see us.
Tim Green gave vital parts of his life to WWOZ and then for WRBH.  He was a man of high integrity.  Yes, he was kind and compassionate, but, as a friend and former colleague of his shared with me over the phone on Friday morning, he was also “forthright”.  He was not afraid to speak his mind, and to take action “whether you liked it or not”.  It is this quality that forced Tim Green to carry a baseball bat around for months when he went to work at WWOZ during the early years in Armstrong Park.  Some people were out to get him, because Tim refused to be intimidated by high, middle, or low class crime.  Tim spent many nights at WRBH to keep the creditors at bay while he worked to bring financial stability to the station.  In another phone conversation we had, Tim confessed that he did not take a salary from WRBH for a whole year, but managed to support himself by playing music.
I see Tim Green as the 21st Century Renaissance Man whom everyone called or reached out to for help.  In the end, when Tim Green needed help because of huge medical bills, he still relied on his music to carry him through.  After Jazz Fest 2014, Tim told me that he was doing much better.  He had been able to pay off a good portion of his bills.
He would be fine, Tim said, as long as he could keep playing his horn.
Tim played to live and he lived to play and he was able to play to the end.
Maybe Tim's passing can be a reminder to celebrate our great givers while they're still with us.  Reflect back on them the light that they've shone.

Beautifully said, Maryse. Thank you for these words. I knew Tim from the WRBH days as well. A more generous spirit I've never known; generous with his time and talent and ears. A great listener, onstage and off. It's rare to find such a seamless connection between art and the artist, the music he played came from a deep place within. Focus, warmth, patience, curiosity, and yes, defiance, were all there. Every room he was in was a better room, every day you saw him was a better day. Say a prayer for New Orleans; it has lost one of its finest citizens. We were a richer city for his presence, and a poorer one for his loss. But, as you say, he gave so much he remains with us. I devoted my show to him last night, and look forward to TR Johnson's tribute on Jazz From The Market tomorrow.

Tim Green was definitely one of the finest spirits in life. Every conversation seemed to be absent of any bad thoughts. No matter what he was going through at the moment, he seemed to end every conversation with a positive view of the future. I am truly saddened by the thought of Tim not being around in the future. Perhaps this is another reminder that we need to pay attention to needs of our fellow man! There are not many "Tim Greens" around, but a lot of good people who may occasionally need a kind word or a few bucks! I am thankful that I knew Tm for quite a while. He went to Umbria Jazz with Michael Ray and the Cosmic Krewe. After that, he always asked "when are we going to Italy again!"
Good bye my friend.

Tim's life was a song well played. His performances will be remembered.

Thank you for such wonderfully written words regarding my brother Tim Green, truly a gentle man, a gentle soul, always even from our childhood he was special and unique. I miss him terribly, but I'm hoping to 'adopt' many new family and friends in the great city of New Orleans, & I'm looking forward to that and I think my brother Tim will be pleased.