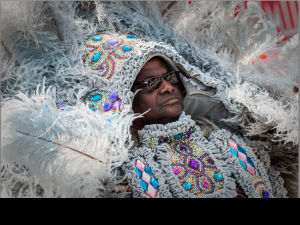 Chief Bannock and the Golden Star Hunters had just performed at The New Orleans Jazz & Heritage Festival on Sunday, April 27.

According to Offbeat Magazine, Bannock first joined the Golden Star Hunters in the late 1950's and worked himself up through the ranks to the position of First Spyboy that he held from 1973 until 1979 when he became Chief.

You can watch Chief Larry Bannock in this clip from the "MacNeil-Lehrer Newshour" that aired in January 1984.

Chief Larry Bannock's funeral will take place Saturday, May 10 at the City of Love Church, 8601 Palmetto St., with viewing at 11 a.m. and service at noon.

The service will be followed by a Mardi Gras Indian tribal ceremony with a horse-drawn carriage procession to 7936 Edinburgh St., and then to the corner of Olive and Pine Streets.

RIP my brother. I first learned of the Indians in early 80s. I saw Larry representing the tradition in some cable show about NO,circa 1985 (included Lil Queenie). I got to meet Big Chief at Jazz Fest of 89. He was gracious and fiercely proud of the MG Indian tradition. Best to his family. In that fabulous showdown in the sky, you will be pretty, my brother. Don't bow down!