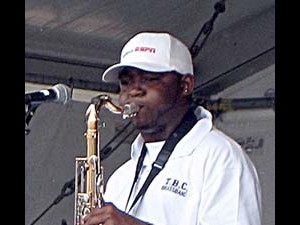 Brandon Franklin, a New Orleans native and saxophonist with TBC Brass Band and assistant band director at O. Perry Walker High School, passed away on the night of Sunday, May 9. He was murdered outside his ex-girlfriend's home at the tender age of just 22.

In his tragically short lifetime, Brandon played with TBC regularly in clubs and on the streets of downtown New Orleans, as well as at all the major festivals in New Orleans. He had just played the New Orleans Jazz & Heritage Festival a week before he passed.

WWOZ sends our teary-eyed condolences to his friends, relatives and fans, and he will be missed.

Friends and relatives have set up a Facebook page in memory of Brandon, and there have been second lines in his memory in the Musicians Village and elsewhere around town all week long.

In addition, on Wednesday, May 19, SilenceIsViolence joined the V.I.P. Ladies and Kids and New Orleans Bayou Steppers social aid and pleasure clubs on a Peace Walk in Brandon’s memory, through the Hollygrove district where he was killed.

Just to clarify for anyone who might have seen the To Be Continued Brass Band at the Fest, it was NOT Brandon playing that day. Brandon was out of town on a band trip with O. Perry Walker High School that weekend and Douane Waples of the Baby Boyz Brass Band played in his place. Just don't want there to be any confusion on this. (By the way, Douane Waples is a 17 year old who just completed his studies as a jazz student at NOCCA.)

A powerful share, I just given this onto a colleague who was doing a bit evaluation on this. And he in fact bought me breakfast as a result of I found it for him.. smile. So let me reword that: Thnx for the deal with! But yeah Thnkx for spending the time to debate this, I really feel strongly about it and love reading more on this topic. If possible, as you develop into expertise, would you thoughts updating your blog with extra particulars? It is highly helpful for me. Huge thumb up for this blog submit!
Wellbutrin hundredth Home Loans For People With Bad Credit Lockheed Phentermine d diet pill knavery