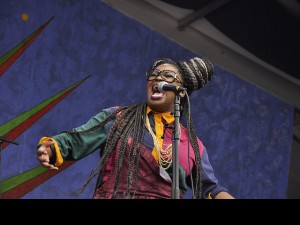 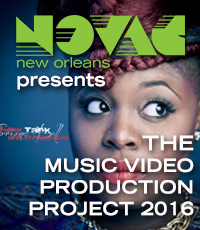 WWOZ is once again teaming up with the New Orleans Video Access Center and the New Orleans Jazz & Heritage Foundation to produce free music videos for local musicians. This program, now in its second year, pairs talented local filmmakers with students (age 17 & up) who want to learn all about the creative process behind music video production. Artists can still submit their music to be considered, and students can sign up through Monday, February 15. Email biliana@novacvideo.org for more information. The program is offered in both New Orleans and Baton Rouge.

Bands interested in getting a free, high-quality music video are encouraged to submit a song or album for consideration at novacvideo.org. Bands will be invited to meet with the small group of students and their mentor filmmaker to help design and produce their music video, so that they receive the image and content that best works for their band and brand. NOVAC’s featured bands this year are New Orleans' Tank & the Bangas and Baton Rouge’s The Chambers, with additional artists to be added and announced soon.

Aspiring filmmakers with any amount of experience can sign up to participate in the workshop, which will take place over multiple dates in February. Students will be guided by an experienced local filmmaker while learning the basics of music video production, including design, storyboarding, production, post-production, effects, and more, through the hands-on process of creating a music video for a local band. Students can apply at novacvideo.org.

The music videos will be produced over three months, February – April 2016, and will premiere in New Orleans at Sync Up Cinema 2016, the free film & music industry conference and showcase during the New Orleans Jazz and Heritage Festival (www.syncupconference.com), as well as at the Baton Rouge Blues Festival 2016.

See one of the videos a student team produced through this program last year for Meschiya Lake & the Little Big Horns below.