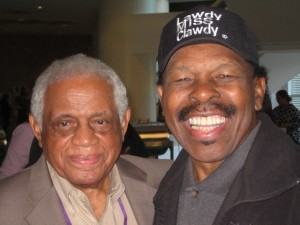 Eddie Ray and Lloyd Price in 2010 [Photo by Sally Young]

R&B vocalist Lloyd Price died May 3, 2021 at the age of 88 due to complications of diabetes. Price was a part of the New Orleans R&B/rock'n'roll revolution in the early 1950s. His first recording, 'Lawdy Miss Clawdy,' was a hit for Specialty Records in 1952. It topped the Billboard R&B chart for seven weeks. In 1959, his song 'Personality' hit a million in sales. He was both a prolific songwriter and gifted singer.

Price was born in Kenner on March 9, 1933. He was one of 11 children. His musical training began as a child when he learned trumpet and piano and sang in his church's choir. At 18, he formed his first band, the Blue Boys. In 1952, Price's big break came when he sat in with Dave Bartholomew's band one night. Dave liked what he heard so he invited Price to J&M Recording Studio to try to record something. They laid down 'Lawdy Miss Clawdy,' a Price original, with Fats Domino on piano. Dave then sent the tapes to Special Records owner Art Rupe, who released the song. It went to #1 on the Billboard R&B chart. Price was only 19 years old.

In 1953, Price was drafted into the U.S. Army and stationed in Korea. When he returned a few years later, Specialty had shifted their efforts to another charismtic young singer-- Little Richard. Price moved on to record a series of national hits for ABC Records, including 'Stagger Lee,' 'Personality,' and 'I'm Gonna Get Married.' In 1962, Price and his business partner, Harold Logan, formed Double L Records. Wilson Pickett is among the notables who got their start on the label. Price and Logan also owned a club called Turntable located at 1674 Broadway in New York, which was the site of the celebrated jazz club Birdland. In 1969, Logan was murdered.

In the 1970s, Price expanded his business dealings again by getting involved with boxing promoter Don King. Price was involved with the famous "Rumble in the Jungle" between Muhammad Ali and George Foreman in Zaire, 1974. Its accompanying concert featured James Brown and B.B. King. Don King and Price formed the LPG record label, which released Price's last hit 'What Did You Do With My Love,' in 1976. In 1979, he moved to Nigeria, where he would remain through 1983.

Price continued touring throughout the 1980s and 1990s while maintaining his businesses. In addition to his work in the entertainment industry, he owned two construction companies and Global Icon Brands, which makes a line of Southern-style foods. In 2010, he appeared on the season one finale of the HBO series Treme. In 2011, Price released his autobiography, The True King of the Fifties: The Lloyd Price Story and worked on a Broadway musical about his life. His final album, 'This Is Rock'n'Roll,' was released in 2017. In 2019, it was revealed that Price was among the hundreds of artists whose original material was destroyed in the 2008 Universal fire.

Price was inducted into the Rock & Roll Hall of Fame in 1998.