Lloyd Price Visits Billy Delle on Records from the Crypt 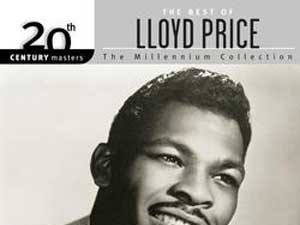 On Wednesday, October 20, "Mr. Personality" Lloyd Price will visit Billy Delle during Records from the Crypt at around 7 p.m. Price is a legendary New Orleans-based R&B singer whose hit "Lawdy Miss Clawdy" brought him national fame in 1952. He'll be coming in to reminisce and talk about his upcoming gig at Harrah's Casino in New Orleans on Friday, October 22.

Price's later successes came when he refined the New Orleans beat and came out with hits like "Stagger Lee" and "Personality". To give you an idea of what a treasure the man is in Louisiana, there's a Lloyd Price Avenue in Kenner (the New Orleans suburb where he's from), and the mayor of Kenner declared August 17 "Lloyd Price Day".

Don't miss this special visit — and catch those Records... from the Crypt.

Bobby Seale said he named his son Stagger Lee Seale because he wanted his kid to be seriously tough, not somebody named after a president etc. This was all filmed by KQED, the nation's very first public TV station (San Francisco). Boston was #2 and NYC was much later.

So...I teased my pregnant wife (1969) about naming our possible son "Rastus." He wound up being named "Cyrus Joaquin", Cyrus because he was a mighty champion and Joaquin because there were two of them in California history, both poets and bandits.

Bobby Seale was a hero to me, a white guy who listened to him and Huey as they invented Black Panthers in front of Oakland City College :-) Bobby was the one with the sense of humor, Huey was Mr. Handsome...and he died in a drug deal.

Great radio. It's 10.00am here in Western Australia and I really don't know how I get any work done with this sort of stuff going on. Just another wwoz gem. Thanks, congratulations and keep opening that very special crypt!