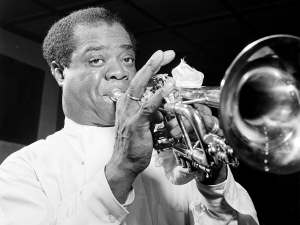 The virtual event pays tribute to 20th anniversary of Satchmo SummerFest presented by Chevron, an annual festival dedicated to the life, legacy, and music of New Orleans’ beloved native son, Louis Armstrong. Traditionally, Satchmo SummerFest has been a weekend filled with music, education, cuisine, and culture on the grounds of the New Orleans Jazz Museum. Due to public health concerns surrounding the COVID-19 pandemic, FQFI announced the cancellation of the event in May.

For more information on the schedule and how to access the performances, visit satchmosummerfest.org.

Below, more detail on WWOZ's special programming during this weeklong celebration:

Traditional Jazz with Dan Meyer, 9-11am
Dan Meyer will showcase an archival WWOZ interview he conducted in 1994 with the late Louis Armstrong historian and biographer Tad Jones, who among other things, discovered Armstrong's baptismal certificate and established Armstrong's birth date as August 4, 1901, rather than the date Armstrong claimed-- July 4, 1900.

Traditional Jazz with Leslie Cooper, 9-11am
Leslie Cooper will be revisiting one of the most memorable musical partnerships ever -- Louis Armstrong and Ella Fitzgerald, who collaborated on three albums in the 1950s.

Traditional Jazz with Sally Young, 9-11am
Sally Young will be focusing on the extraordinary archivist, historian, and researcher Ricky Riccardi, Director of Research Collections for the Louis Armstrong House Museum, and author of What a Wonderful World: The Magic of Louis Armstrong's Later Years. Ricky has visited WWOZ a number of times, and we're bringing you highlights from these great conversations.

Traditional Jazz with Keith Hill, 9-11am
Keith Hill will feature music from the final decade of Louis Armstrong's career, when he had some of his biggest hits and reached a worldwide audience, and included collaborations with Duke Ellington and Dave Brubeck, an album of Disney songs, a James Bond theme, and more.

Traditional Jazz with Big Pete, 10am-12pm
Big Pete will showcase the legendary early recordings of Louis Armstrong with the Hot Five and the Hot Seven from the 1920s, his first recordings with his own band, which set a standard for all jazz recordings that followed.

PLUS any or all of our other show hosts might break format to help celebrate Louis Armstrong this week - so expect the unexpected! As always, you can listen live to WWOZ at 90.7 FM locally or this link anywhere.