Documentary Film A Man And His Trumpet: The Leroy Jones Story Wins Louisiana Endowment for the Humanities Award 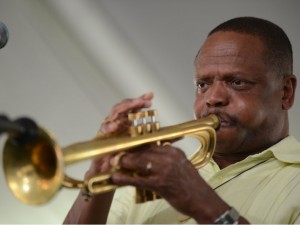 The Louisiana Endowment for Humanities announced today that A Man And His Trumpet: The Leroy Jones Story will be the recipient of the Louisiana Endowment for the Humanities Award For Documentary Film for 2019. The film was directed, shot, and edited by San Francisco filmmaker Cameron Washington over a three year period in New Orleans and the surrounding areas. The awards will be presented in Lafayette, Louisiana on April 4, 2019. Director Cameron Washington, and documentary subject Leroy Jones will be in attendance at the awards ceremony.

The film follows the life journey of the famed trumpeter and legend as he comes up in the projects of the 7th Ward in New Orleans. By the time he was 12 years old, Leroy's talent was apparent and his devotion to both his city and his craft has never wavered. He leads the brass band revival of the 70's in Nola leading to the creation of the Fairview Baptist Church Band, and the Hurricane Brass Band. Along the musical journey, Leroy's trumpet sound catches the ear of Harry Connick, Jr., launching him from hometown virtuoso to world renowned phenomenon as he plays alongside Connick as his solo trumpeter for 25 years.

Watch Leroy's life story unfold more than a decade post-Katrina as he balances a complex life in New Orleans while being one of the most in demand trumpeters in the world. Filmed entirely in New Orleans and edited in San Francisco, this documentary celebrates the culture, history and music of New Orleans.