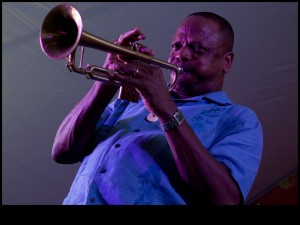 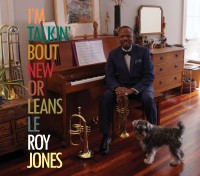 "The mission of the Leroy Jones Quintet is to expose audiences everywhere to the authentic music of New Orleans; the music of Louis Armstrong, Buddy Bolden, Danny Barker and all the other greats who have helped create the rich gumbo that is the sound of New Orleans while putting our own, more modern, stamp on it." -Leroy Jones

Trumpeter Leroy Jones' latest, I'm Talkin' Bout New Orleans, is full of original compositions and is his first release since 2009's Sweeter Than A Summer Breeze. FIrst available at French Quarter Fest earlier this month, Talkin' is full of Jones' take on New Orleans life around Carnival, parties, good eats, Louis Armstrong, and more. Jones is a pleasing listen with great support from the New Orleans jazz community. He is a native of New Orleans, whose playing has been described as a blend of Louis Armstrong and bebop virtuoso Clifford Brown.

This album has been underway for some time, and received its final push of support from the Threadhead Cultural Foundation in their Fall 2014 grant cycle. "Although I am producing the recording on my own, one of my priorities is to pay the musicians well for their time. This is what they do for a living, and you can't take favors and discounted rates to the bank," says Jones.

Jones has caught the ears of people outside of New Orleans for decades. In the 1990s, the New York Times said of his performance with Harry Connick, Jr.: "Leroy Jones [is] a superb trumpeter who tossed off traditional New Orleans jazz lines and modernist runs." Larry Blumenfeld of Village Voice said Jones is "the hometown trumpeter most deserving of wider acclaim."

Jones has a wonderful classic jazz sound throughout and strays into different geographic feelings on a few songs, including a Caribbean flavor on 'Time Is Always On Your Side.' A number of wonderfully talented musicians join Jones for Talkin', including Alonzo Bowens, Wessell "Warm Daddy" Anderson, David Harris, Terrance Taplin, Katja Toivola, Helen Gillet, Todd Duke, Larry Sieberth, Jason Stewart, and Shannon Powell.

I'm Talkin' Bout New Orleans is available on CD and mp3 from the Louisiana Music Factory, iTunes, and Amazon.

Leroy Jones & New Orleans Finest will be performing live at WWOZ on Tuesday, August 2 around noon and at Satchmo SummerFest's Red Beans & Ricely Yours Stage on Sunday, August 7 from 4:30-5:45p. See the full festival schedule here.