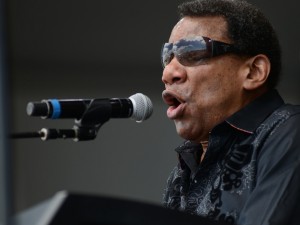 ​New Orleans piano genius Henry Butler has passed away at the age of 68.

Blinded by glaucoma at birth, Butler began playing the piano at age six, and professionally arranged, composed, and performed since age 12. One of the premier torchbearers of the New Orleans jazz and blues piano tradition, Butler played for audiences across the world for decades.

Butler’s sound was a rich blend of jazz, Caribbean, classical, pop, blues, and R&B. He took influences from many sources, including his own past growing up in the Calliope Projects in New Orleans. He played and learned with the great Alvin Batiste, Sir Roland Hanna, Professor Longhair, and James Booker, among others. He studied at the Louisiana School for the Blind, Southern University, Baton Rouge, and Michigan State University. As his prowess grew, his tours took him abroad where he was influenced by other regions of the world, including Brazil, France, Norway, Italy, Japan, and Australia.

Throughout his tours, he remained a presence in the clubs and festivals in and around New Orleans. He performed much-anticipated sets at the New Orleans Jazz & Heritage Fest over three dozen times, both solo and as part of a group, with his first appearance being in 1976 and his final one being this year.

In addition to performance, Butler championed music education. He conducted workshops, clinics, and master classes throughout the United States, as well as a camp for blind and visually impaired teen musicians.

Butler was also, surprisingly, a photographer. His work explored the sighted world's relationship with the flat representational image. This aspect of his life's work was featured in the documentary Dark Light: the Art of Blind Photographers.

Butler had a long relationship with WWOZ. He performed many times at WWOZ's annual Piano Night benefit concert. He also visited and performed in our studios numerous times throughout the years, including in the first video, below, from February 2, 2017. The second video is from his performance at Piano Night 2016, honoring another New Orleans piano great, Allen Toussaint, with a stylized cover of his song 'Get Out Of My Life Woman.'

He spent the last few years of his life alternating between cancer treatment in Germany and performing around the world.

Our sympathies go out to Henry Butler's family and friends. Arrangements have not yet been announced.​

Below, some of our many photographs of Henry Butler through the years: