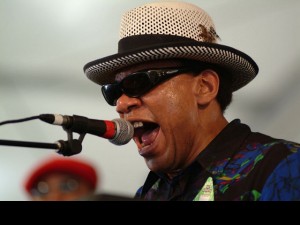 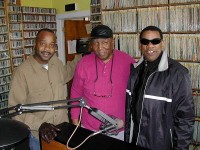 Back in the day: James Andrews, Bob French, and Henry Butler at WWOZ [Photo by Black Mold]

“Whenever I’m onstage with Henry Butler, I gotta keep my ears and eyes open because I’ll be in school.  Some of the things he plays are just unbelievable. Normally I’ll just try to go back and listen to it to see if I can figure it out and I never get one note right." -Troy "Trombone Shorty" Andrews

Often considered the premier exponent of the great New Orleans jazz and blues piano tradition, Butler is a ten-time Pinetop Perkins (formerly W. C. Handy) Best Blues Instrumentalist Award nominee. His music is a rich amalgam of jazz, Caribbean, classical, pop, blues, and R&B. Blinded by glaucoma at birth, Butler has been playing the piano since he was six years old, and arranging, composing, and performing professionally since he was twelve.

A New York Times review of a performance at New York City’s Jazz Standard described Butler as “percussive in his attack, ostentatious with his technique…the picture of stubborn mischief — and, not coincidentally, of New Orleans pianism. He obliged the spirit of the occasion with his own stylistic consommé: billowing whole-tone glissandi; furrowed, Monkish hiccups; boppish two-handed octaves; flare-ups of funk and Chopin.”

Butler’s sound has been influenced by the streets (he grew up in the Calliope Projects in New Orleans, has traveled the world, lived on both coasts and in the heartland); by studying with the greats (Alvin Batiste, Sir Roland Hanna, Professor Longhair, and James Booker, among others); by institutions (Louisiana School for the Blind, Southern University, Baton Rouge, and Michigan State University); and by his willingness to explore new boundaries and to take risks.

To date, Butler has played almost every major club and festival in the United States, as well as venues in Brazil, France, Norway, Italy, Japan, Australia, and more. For over forty years, he has conducted workshops, clinics, and master classes throughout the country; he also developed a camp for blind and visually impaired teen musicians, the subject of a 2010 documentary, The Music’s Gonna Get You Through.

In 2015, a special performance and award presentation was held in Butler's honor at Piano Night. We are thrilled to welcome him to perform this year.