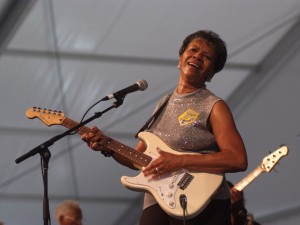 Barbara Lynn, The Empress of Gulf Coast Soul, has been named a National Endowment for the Arts National Heritage Fellow for 2018. She is one of nine recipients to receive the Fellowship this year. Fellows are honored as those who carry on and contribute to art forms from their community.

Lynn first came to New Orleans in 1962, when producer Huey P. Meaux brought her to Cosimo Matassa's studio to cut her biggest hit, 'You'll Lose A Good Thing.' She went on to have ten singles in the Billboard Top 100. It was rare at that time for a young woman to be fronting a band, playing an instrument, and writing her own songs, but Lynn helped blaze the trail. Since the 1960s, Lynn has toured with many American musical legends, including Smokey Robinson, Jackie Wilson, Ike and Tina Turner, Sam Cooke, Otis Redding, Gladys Knight, Aretha Franklin, and Freddy Fender. The Rolling Stones, among others, have covered her songs, and a new generation of artists. including Moby and Lil Wayne, have sampled her music.

A native of Beaumont, Texas, 76-year old Lynn is a regular at Louisiana festivals, including Jazz Fest and the Ponderosa Stomp. "The singing never left me. That's all I ever wanted to be. I just love to entertain. I don't care if its for an audience of one," she told the Ponderosa Stomp.