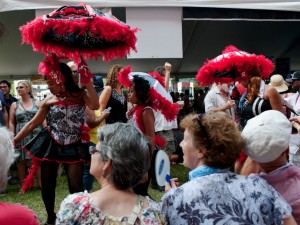 The 2018 Satchmo Summer Festival, New Orleans' annual tribute to Louis Armstrong, happens the first weekend in August each year. Armstrong's birthday was August 4. This year's festival is taking place at the New Orleans Jazz Museum at the Old U.S. Mint from August 3-5. Daily admission is $5, with children 12 and under admitted free. Music will take place on two tented stages outside the building.

This year's lineup is a powerhouse, with eight acts making their Satchmo Summer Fest debut. Irma Thomas will perform Sunday, August 5. "Mr. Armstrong was an influence on a lot of young children, including me," she says. "I never thought I would be in the business but then saw him as King Zulu when I was nine years old. That parade passed right in front of my house and left such an impression!"

Other artists making their debut this year are Aurora Nealand & the Royal Roses, Bonerama, Doyle Cooper Jazz Band, Dwayne Burns & His New Orleans Band, James Williams, Mayumi Shara & New Orleans Jazz Letters, and Where Ya At Brass Band. Check out the complete lineup below and tune into WWOZ the week leading up to the festival as we welcome a few different Satchmo Summer Fest artists into our studio to perform live!