Published on: January 10th, 2018
New Orleans celebrates 300 years this year, and in honor of that, we're launching a new series: WWOZ's Tricentennial Music Moments, on-air and online. In this feature, learn more about the moments, stories, and people who have shaped the Crescent City.

If you study the music of Danny Barker, you're hearing the entire history of jazz.

Danny Barker is one of the great icons of New Orleans. He was a guitarist and banjoist, historian, composer, bandleader, sideman, teacher, mentor, and much more. There's so much to say about Danny Barker that it's easy to forget his actual music-- and Danny himself was so humble he wouldn't talk about it much.

But if Danny Barker had only been a guitarist and banjoist, he would still be one of the great figures in 20th century jazz. When Danny played in Big Bands, he played what is now known as the Freddie Green style. Most jazz guitarists today learn this style, like this, with a lot of fat chords on the lower strings.  They call it four on the bar, or four to the floor.

But when Danny was in a small ensemble he stood out more.  he played chord substitutions, color tones,  He would even use polyrhythms, and syncopated rhythms.

Sounds easy, right? This was the genius of Danny Barker, because it's not easy at all -- he just makes it sound effortless.

When he played solo, he played like a piano, using the bass, and the chords, and full arrangements on one instrument.  And he’d pull out all the stops, and sing on top of it.

And then there was the banjo.  In other places the banjo was played as just a  rhythm instrument.  But in New Orleans he learned what was called the "rigamarole" style, that lifted the band and got people to dance.

And everything he did on guitar, he also did on the banjo, which was unprecedented, but nobody ever tells you this. Because he sounds so natural and conversational, you're not always hearing how complex it all is. So next time you hear 'Save the Bones for Henry Jones,' or 'Eh La Bas,' take a closer listen, and you'll hear the fingerprints Danny Barker left on the sound of New Orleans.

This feature's narrator and performer is Seva Venet. Seva Venet has lived in New Orleans since 1999. After arriving, he worked with Tuba Fats and His Chosen Few for four years. It was during his time with Tuba that he was introduced to many of the local greats including Gregg Stafford, Leroy Jones, and Shannon Powell who, after first playing with Seva, exclaimed, "I came up with Danny Barker! You sound like Danny Barker! Get a gitjo [a 6- string banjo] and come by my house...we’re going to record." Seva has also taught music to hundreds of schoolchildren in New Orleans through educational workshops and symposiums throughout the city. ​ 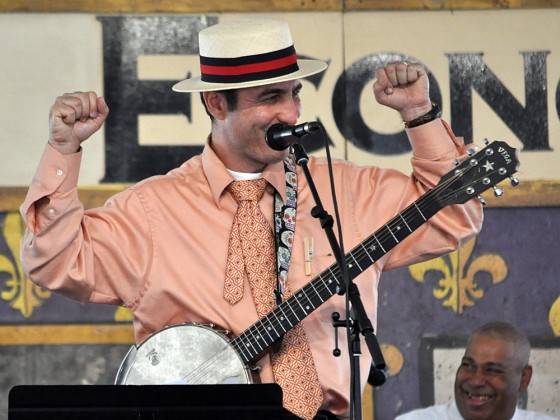