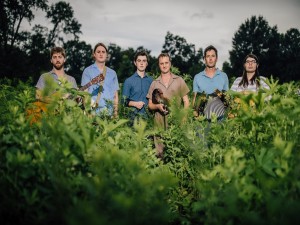 Such questions are something that The Lost Bayou Ramblers have been chewing over for the last couple of years, and they have used them to produce a celebration of Louisiana’s music in all its kaleidoscopic glory in their new CD, Kalenda, in two special shows at the Music Box Village on Saturday, December 9, 2017.

Reveling in Louisiana’s complex history and musical diversity, Kalenda is named, in part, after a Caribbean dance performed in New Orleans’ Congo Square in the 1700s and early 1800s, the intricate rhythms of which, said Michot, transcended both musical and race-lines as they worked their way into Creole and Cajun music.

“Kalenda is found in all kinds of Louisiana music,” said Louis Michot. “It’s in Cajun music, it’s in Zydeco, it’s in Louisiana rock ‘n roll. There is always so much more than just black and white in Louisiana music’s heritage, and we wanted to bring all the musical influences together and explore that.”

“To me, the mystery of Kalenda is part of its beauty,” said Michot. “You hear about how it was performed at Congo Square and adopted by the other cultures, the French and the Spanish, who were bystanders to the dances that were held on Sunday’s at Congo Square, but nobody seems to know that much about it. Yet Kalenda is everywhere in Louisiana music; even if you don’t know the name, you know the sound.”

Michot first began to explore the history of Kalenda and its Louisiana legacy after listening to an old field recording of traditional Cajun songs, including one called Kalenda.

“That song is about a girl who dances so close to you, you have to bring a chaperone, because she is going to break all the rules,” said Michot. “But then that song came from a dance, where people dance close together, also called the Kalenda, which was transformed by the song into a girl. Then we also got this Cajun lullaby, which is a bridge between those songs from over a hundred years ago, that goes 'Dance, dance, the Kalenda!  Boujoum!  Boujoum!', and there you have the Kalenda rhythm right there. So, imagine, just imagine, the voyage that Kalenda - the song, the rhythm, the dance -  has taken from Congo Square, to Acadiana, the rest of Louisiana, and then the world, thanks to Louisiana music.”

The Lost Bayou Ramblers have never been shy about pushing innovative boundaries when it comes to Cajun music. While still very much a Cajun band, their 2012 CD Mammoth Waltz saw them making a musical leap into new territory with programmed beats, a dash of punk rock, and a touch of rock n’ roll distortion.

“To me, Kalenda represents so many sides of Louisiana culture, it is so easy to say music is just black and white, Cajun or Creole, Jazz or Blues,” said Michot. “We are definitely a Cajun band, but I just see so many influences coming from all the genres towards each other. So, Kalenda is really just an ode to Louisiana culture as a whole - in all its beauty and complexity.”

More information is available at https://www.lostbayouramblers.com/

DUE TO INCLEMENT WEATHER THE SHOW HAS BEEN MOVED TO SATURDAY DEC 9 AT 6.30 PM AND 8.30 PM. TICKETS PURCHASED FOR FRIDAY'S  SHOWS WILL BE HONORED AT EITHER OF SATURDAY'S SHOWS.