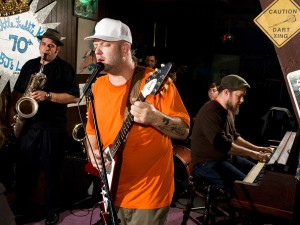 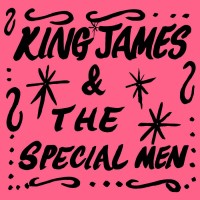 Since Jimmy Horn’s migration to New Orleans from Seattle in the early 90s, King James & the Special Men have made a mark on the New Orleans’ music scene through their various residencies at BJ’s Lounge, the Mother–In–Law Lounge, and Saturn Bar. Originally, the band covered obscure New Orleans R&B singles; their new disc, Act Like You Know, is the band’s first release of original material. Despite Horn’s roots, the sounds of Act Like You Know are inherently New Orleans, grown and nurtured through years of playing various residencies, garnering the attention of New Orleans’ finest, while simultaneously shaping their New Orleans sound. Act Like You Know weaves together the myriad of New Orleans influences King James & the Special Men bring to their live shows, as well as highly energetic, gritty, and raucous rock and roll in a way that pushes the sound of New Orleans forward, while continuing to honor its pioneers.

Act Like You Know is characterized most by its wild concluding track “9th Ward Blues.” Beginning with a fuzzy distorted bass riff à la the Stooges, the track blends Mardi Gras Indian chants with punk rock conventions that explode into a raucous brass band jam, and then later delves into free flowing chaos and improvisation. It’s exhaustive in all of its 14 minutes, however its transcendence is powerful and deserving of a careful listen.

The rest of Act Like You Know contains shorter songs marked by The Special Men’s distinctive sound of vintage New Orleans R&B presented in a way that capitalizes on the band’s raucousness. Beginning with “Special Man Boogie,” a rolling piano personifies the signature New Orleans rock n’ roll sound of fast piano blues and a bright collection of horns that swings all the way to the end.

Overall, with Act Like You Know, King James & the Special Men bring the energy, passion, and spirit of what New Orleans music is all about in a way that’s fun, rambunctious, and fit for partying. The band’s energy, affinity for New Orleans R&B, and highly energetic playing combined with gutsy playing culminate into a cohesive debut record that represents the band’s live sound accurately and favorably.

Let em have it! With no problem!!

King James and the Special Men will be performing live on WWOZ Wednesday Night Kitchen Sink Show on September 13th around 10:30 p.m.

Let em have it! With no problem!!

King James and the Special Men will be performing live on WWOZ Wednesday Night Kitchen Sink Show on September 13th around 10:30 p.m.