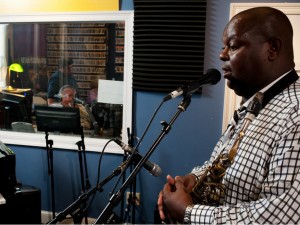 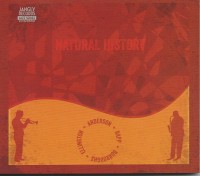 While he is not busy filling “the void of jazz music to students” of all ages, saxophonist Wess “Warmdaddy” Anderson has teamed up with Mark Rapp (trumpet), David Ellington (organ), and Chris Burroughs (drums) for this swinging and energetic released Natural History. The Brooklyn-born, NOLA-adopted saxophonist became impassioned with New Orleans jazz as a result of playing jazz clubs around the city as early as fourteen years old and studying under renowned clarinetist Alvin Batiste at Southern University. Released on April 14, Natural History is full of swinging melodic grooves that will soothe the listener’s soul and satisfy an insatiable appetite for swinging tracks.

Natural History begins with its title track of this straightforward handclapping spiritual chant of "Natural History" that is simple and familiar only to seamlessly direct the listener into a more complex jazz drum beat juxtaposed over the handclaps. Throughout the song, the melodic horn lines combined with the soulful organ alternate between Burroughs’ passionate drum soloing, then back to the horn melody. ‘Stroke Blues’ is littered with infectious horn melodies that stay in the listener’s head as the album continues on. The longest track on the record, coming in at over 8 minutes, ‘Stroke Blues’ is an example of Anderson’s inclusion of his band members indulging in some tasteful, soulful expressions.

What is impressive about this effort from Wess “Warmdaddy” Anderson is his willingness to share the spotlight with his fellow musicians—throughout the record are multiple solos from each instrument demonstrating Anderson’s egalitarian approach to these compositions: a refreshing sentiment among the jazz community. The tracks on Natural History all have their own complexities within them, yet at their core, they swing with feeling are overall easily digestible even to the lay-jazzperson. These solid swinging tracks, filled with tasteful improvising, from each musician in “Warmdaddy’s” quartet, successfully capture the quintessential swing sound for this heartwarming release during these modern, electric times.