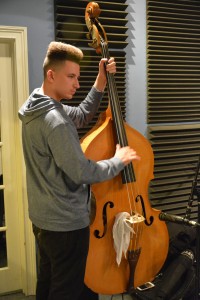 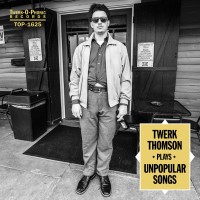 Tyler “Twerk” Thomson, bassist for the Shotgun Jazz Band, has come out with his debut release entitled Twerk Thomson Plays Unpopular Songs on his new record label, Twerk-O-Phonic Records. Released on February 1, Twerk Thomson Plays Unpopular Songs is a different type of traditional jazz album. Instead of polished and pristine, these cuts are gritty and accompanied by the pops and hisses that give vinyl recordings their character and charm. The project came into existence after Thomson acquired a Presto K8 lathe from the 1930s, restored it, and used it as a launching point for his new label.

Recorded live “with one microphone into a Presto K8 lathe, cut directly to 78 rpm acetate discs, and edited only for volume,” the laissez-faire approach to production works in Thomson’s favor and his approach is refreshing in its antiquity. With no opportunity for over-dubbing or editing the recording, the performances captured here have an added rawness based on the fact they all had to recorded in one take.

The album is split up between four different ensembles featuring Thomson: Twerk Thomson Trio, Twerk’s Dance Band, Twerk Thomson’s 5, and Twerk & Marla. The Twerk Thomson Trio opens up the album with ‘Oh, You Beautiful Doll,’ featuring Ben Polcer, (trumpet) plays the melody with ease, while Kris Tokarski (piano) helps keep the rhythm bouncing and swinging throughout the first six tracks of the album.

The album concludes with ‘Twerk & Marla’ (Dixon) from the Shotgun Jazz Band on ‘Home:’ a calm and relaxing number that captures the blend of Marla Dixon’s powerful voice and tasteful trumpet, overlaid over Thomson’s tenor guitar rhythms. It’s simple, yet impressive as the brightness of the vocals, trumpet, and guitar feel well balanced, something unexpected for such an untraditional method of live recording.

Overall, Twerk Thomson’s approach to these recordings is impressive and complements the content by successfully putting those traditional songs in the same presentation and feeling that is inseparable from traditional jazz.

Twerk Thomson Plays Unpopular Songs is available on CD and mp3 the Louisiana Music Factory and directly from Twerk on Bandcamp.

Below, see Twerk perform with The Shotgun Jazz Band at WWOZ in March 2016 with Marla Dixon on trumpet/vocals.