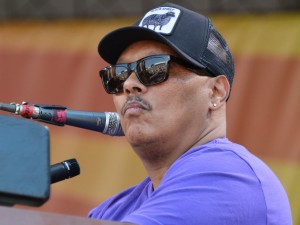 A powerful new video from Dumpstaphunk's collaboration with Trombone Shorty for the song 'Justice' was released on Inauguration Day (January 20, 2017). The song was first released in early 2016 during the presidential campaign. The video was purposely released on the day of Donald Trump's inauguration to offer a hopeful, yet cautious, message amidst the uncertainty and upheaval in our nation today.

"This song is basically our current take on the message of equal opportunity and the right to a decent life for all humans," says Dumpstaphunk leader Ivan Neville. "The human part is that major common thread that some other humans have the ability to ignore. This song is to remind people that we are all in this together no matter what your beliefs, race, or any other perceived differences. When you look at how far we've come and think about all the progress we've made and then think about how far we still have to go. That's when you need justice in all its form."