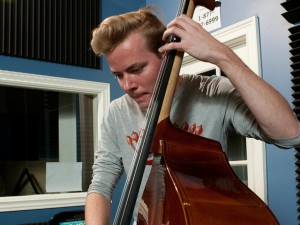 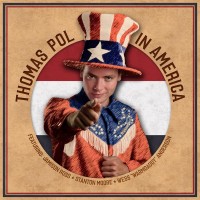 University of New Orleans Distinguished Musical Scholarship recipient and bassist Thomas Pol features a collection of original compositions and collaboration on his new release, In America. The album features three different groups that engage the listener in a well thought out way.

The first ensemble is composed of Amari Ansari (sax), John Maestas (guitar), Josh Starkman (guitar), Peter Varnado (drums), and Pol (bass). This first group plays on tracks 1-4 and highlights the in-your-face guitar riffs which are complemented by the warm, tasteful saxophone phrases. They also draw from funk influences, especially in 'Second To Last,' where Pol lays down some bouncing grooves that delve into deeper jams allowing for each musician to demonstrate their proficiency.

Tracks 5-8 feature Wess “Warmdaddy” Anderson (sax), Victor Atkins (piano), Ed Perkins (vocals on tracks 5-6), and Jamison Ross (drums and vocals on track 8). The warm vocal style of Ed Perkins and blues influences on 'Easy Credit' is a nice transition from the previous, guitar-centric tracks. 'The Black Cat' takes a step into modal jazz and highlights each player, letting “Warmdaddy,” Atkins, and Pol take flight into their soloing and lift the dynamics from a light swing to a powerful crescendo.

The last four tracks of In America feature Stanton Moore on drums and Brian Seeger, Pol’s professor, on guitars. This mixture of tracks brings the guitar back into the ensemble and it plays a large focus on this set of tracks. Brian Seeger’s composition 'Secret Gardener' is mellow and relaxing due to Seeger’s slide guitar playing. In America finishes out with 'Pol Dance,' a funk-influenced composition that is held together by Pol’s proficient bass playing. Combined with Stanton Moore’s tight drumming, the group is able to delve into somee deeper experimental spaces only to come back to the main riff to get the listener bobbing their head.

Thomas Pol’s In America is available on CD and mp3 from CDBaby and iTunes.