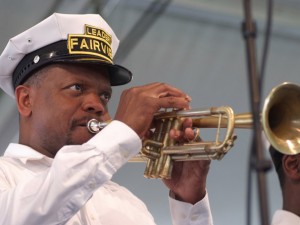 Leroy Jones 'Back To My Roots' 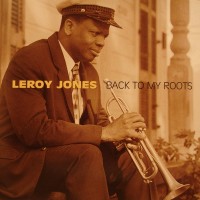 Leroy Jones's critically acclaimed and out-of-print album Back To My Roots was re-released in late October to the benefit of jazz fans everywhere. Jones is joined by an impressive cast of New Orleans musicians for this release, including Uncle Lionel Batiste, Benny Jones, Gerald French, Paul Longstreth, and Craig Klein.

Originally released in 2002, Back To My Roots features a mix of classics like 'Pennies From Heaven,' 'When The Saints Go Marching In,' and an especially pretty version of 'Georgia On My Mind' along with mainstream staples and original compositions. The upbeat 'Leroy's Special' is a standout amongst a high-level album. Jones also does right by the aptly-titled 'Sweeter Than A Summer Breeze.' Jones's sophisticated trumpet skills are on full display on 'Tea For Two,' 'Minor Bash,' and the fantastic 'ReBirth Shuffle.'

Jones has caught the ears of people outside of New Orleans for decades. In the 1990s, the New York Times said of his performance with Harry Connick, Jr.: "Leroy Jones [is] a superb trumpeter who tossed off traditional New Orleans jazz lines and modernist runs." Larry Blumenfeld of Village Voice said Jones is "the hometown trumpeter most deserving of wider acclaim."

Jones's impressive resume includes membership in the New Orleans Jazz Hall of Fame. He was a bandleader at the tender age of 12, taking charge of the seminal Fairview Band, a brass band whose alumni have included some of the best known musicians in New Orleans. It was the Fairview Brass Band which is widely credited with restoring interest in the brass band tradition of New Orleans. Today, Jones is a regular at Preservation Hall and a featured performer in the Harry Connick Orchestra, where his playing and singing have made him a crowd favorite, Jones has performed on every continent and in every major U.S. city at prestigious theaters, festivals and jazz clubs like the Village Vanguard in New York City. His television appearances include The Tonight Show, Good Morning America, Late Night with David Letterman, The Today Show, Arsenio Hall, Conan O'Brien and Oprah Winfrey. He is also a regular at the world famous New Orleans Jazz & Heritage Festival, as well as French Quarter Fest and the Satchmo SummerFest. Below, check out Leroy Jones & New Orleans Finest's appearance at WWOZ last summer as part of our 2016 Satchmo SummerFest preview series.

Back To My Roots is available now on CD and mp3 from the Louisiana Music Factory, CDBaby, iTunes, and Amazon. Leroy Jones will be performing locally on New Year's Eve at the Bombay Club.