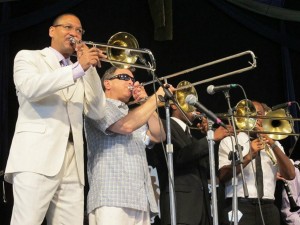 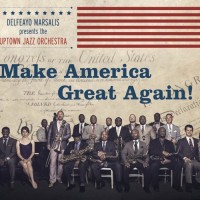 The latest from Delfeayo Marsalis is the unexpectedly titled Make America Great Again!, a rich musical tapestry in which Marsalis is joined by 39 other musicians and contributors. It's impossible not to immediately notice the equivalence of the album title with this year's Republican presidential candidate's campaign slogan. Donald Trump's ubiquitous campaign hat and 1984-esque rally cry has permeated certain portions of the American population with vigor-- and Marsalis is answering. Make America Great Again! (the album) strikes an incredible balance between propaganda, satire, political and social commentary and, most of all, impressive musicianship. This is a hugely powerful album, released at what will certainly be remembered as a notable turning point in our country's history.

Make America Great Again! opens, appropriately, with the 'Star-Spangled Banner' before moving into 'Snowball,' a likely aptly titled commentary on the current political climate in the United States. Marsalis brilliantly weaves the sounds most associated with the "Greatest Generation" (those who grew up during the Great Depression and World War II) in numerous Big Band inspired songs, including 'Symphony in Riffs' and 'Second Line.' The charged 'Back to Africa' gives a pleasantly jazzy background to a common racist refrain, "Go back to Africa," while putting a positive spin on the phrase, extolling the many virtues of the continent.

The title track 'Make America Great Again!' features amazing tongue-in-cheek political commentary from Wendell Pierce. 'Living Free and Running Wild' invokes the experiences of Africans brought to America on slave ships with rapping from another New Orleans musician, Dee-1. More standout tracks come on the inspirational 'Fanfare for the Common Man' and the romantic 'Skylark.' Marsalis also includes a chilled out instrumental version of 'All of Me.'

For more on the incredible musicianship behind this album, check out Marsalis's recent interview with Jazz Pensacola blog.

Make America Great Again! is available on mp3 and CD from iTunes, Amazon, CDBaby, and all the finer retail music outlets near you.