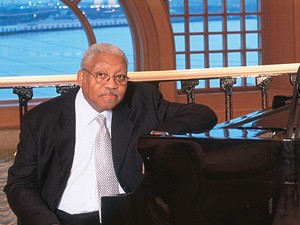 Ellis Marsalis is regarded by many as the premier modern jazz pianist in New Orleans. After high school Marsalis enrolled in Dillard University (New Orleans) as a clarinet major. He graduated with a Bachelor of Arts degree in music education in 1955. After a stint in the U.S. Marines, Marsalis returned to New Orleans he married Dolores Ferdinand, who bore him six sons: Branford, Wynton, Ellis III, Delfeayo, Miboya and Jason.

In the 60s and 70s, Ellis performed regularly at New Orleans venues like the Playboy Club, Al Hirt's club, and Lu and Charles'. After twelve years at NOCCA as an instrumental music teacher with a Jazz studies emphasis, Marsalis became the coordinator of Jazz Studies at Virginia Commonwealth University for 2 years in the mid-80s. He later returned to the University of New Orleans to become the first occupant of the CocaCola endowed chair of Jazz Studies as the director until his retirement in 2001.

Marsalis has been the recipient of Honorary Doctorate degrees from Dillard University and Ball State University. He continues to lead his own group and has several recordings on the CBS-Sony label. He is currently developing his own recording label, Elm Records, with his wife Dolores and son Jason.