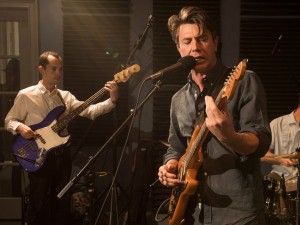 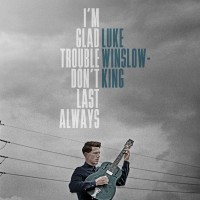 The latest from New Orleans-based Luke Winslow King, I'm Glad Trouble Don't Last Always, tells the tale of a marriage gone south and the subsequent effects felt by Winslow-King. Much of it was written and recorded while the band was on tour in Italy in 2015, reflecting a new direction after a rough couple of years for the lead singer/songwriter that found him in solitary confinement in rural Michigan for a low-level marijuana charge followed by a surprising divorce.

The 9-track album opens with the gospel-inspired 'On My Way' before moving into the title track, 'I'm Glad Trouble Don't Last Always,' a dark rocker Winslow-King also performed at WWOZ last March (see video below). 'Change Your Mind' belies the heartache that comes with the breakup of a longtime relationship and the responsive 'Esther Please' is a lyrical playground as Winslow-King sings, "when the world turns to trouble/evil ain't far behind." 'Heartsick Blues' showcases the wonderful fiddling skills of [WHO IS PLAYING FIDDLE] while 'Watch Me Go' highlights a beautiful sense of empowerment amidst heartache. I'm Glad ends on an appropriately hopeful note with 'No More Crying Today.'

For a record reflecting on a breakup, I'm Glad Trouble Don't Last Always is remarkably upbeat. As he told OffBeat in August, "I sat myself down and thought about it: 'You’re going to make a breakup album, what are you going to do?' And I didn’t want to start moaning about the bad things that happened, that’s not very constructive."

Winslow-King showcases impressive range within the Americana genre, moving adeptly through gospel, blues, rock'n'roll, soul, and country. He's backed by a strong and flexible band consisting of Roberto Luti, an incredibly talented Italian guitarist who could also be found on Royal Street for some time in the early to mid-2000s; Brennan Andes, a Michigan-based bassist with a lengthy jazz and jam band background; drummer Benji Bohannon; and keyboardist Mike Lynch.

I'm Glad Trouble Don't Last Always is available on mp3, CD, and vinyl directly from Bloodshot Records and from the Louisiana Music Factory, iTunes, and Amazon.