Michael Hurtt and his Haunted Hearts 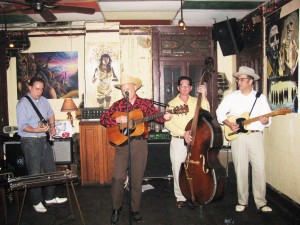 Michael Hurtt and his Haunted Hearts at Mimi's in the Marigny. 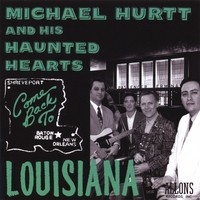 By Danielle Small
Michael Hurtt believes you are never done with New Orleans. Although Hurtt has lived in Detroit since Hurricane Katrina and his guitarist J.D. Mark hangs his hat in Mississippi, they still manage to team up with New Orleans band members, steel and electric guitarist/banjo player Mitch Palmer and upright bass player John Trahey for regular tours and New Orleans dates. Next up, Carnival Time!
How would you describe yourself to someone that has never seen the Micheal Hurtt and His Haunted Hearts?
We're a good mix of hillbilly/honky tonk/blues. Our sound is best described as country western music combined with blues and R&B right around the precipice of the Rock and Roll era. We are greatly influenced by that era, I think it's a very interesting era before rock and roll exploded. You know, late 40's to early 50's. Rock and roll before it became commercial. It almost seems more pure because people were just rockin', nobody was doing it because it was a trendy thing so to speak, something they heard that was the latest fad. Rock and roll has been going on since the beginning of... before recorded days. I always try to think of 1920's hot jazz and blues and how much that has to do with rock and roll and then the western swing of the 30's that came out of New Orleans jazz. We write our own songs and we do a lot of obscure covers, covers of songs that we believe people should hear and we know that they haven't or have been forgotten and so we like to shine a spotlight on them; all our heroes, the people that came before us.
When rock and roll hit, big country and western became sort of cosmopolitan, became polished. But country from before 1955 had a lot more in common with rock and roll, had a sort of free wheeling blues influence that was full of liveliness and spontaneity. That's the feeling we are looking to duplicate.
Where did your country music influence come from?
I'm from Indiana originally, grew up in Indiana. I always liked country music as a kid. My parents didn't listen to country but my grandparents did. Still, I wasn't really around it growing up that much except on the radio, I enjoyed it on the radio. And I listened to all kinds of other music as well when I was a teenager. I got into punk rock the same time I got into 50's rock and roll because I thought it was the same thing; early punk stuff is really influenced by that simplicity; two minute songs. 50's, 60's, 70's country, so simple. Country music was really still good until the early 80's. We don't really want to get into the new stuff. The new stuff is almost like the Eagles or something. We love some later stuff, some polished things, but we're a pretty raw band.
How did the Haunted Hearts come together?
I'm one of the founders of the Ponderosa Stomp, (a two day music and film festival that takes place in New Orleans every September and has been around for a decade now). I started as a consultant, never thought about playing it, but then the opportunity to back Gino Washington came along and I couldn't say no. The next year, when the Stomp rolled around, I got the Haunted Hearts together and we backed Jay Chevalier. This year, at the Stomp, the Haunted Hearts backed Frankie Ford, Jivin' Gene, and of course, Jay Chevalier.
I live in Detroit now and JD lives in Mississippi, and the other guys live in New Orleans, but we all come together, we tour a lot. We toured Europe last winter, and we tour the Midwest, from Detroit, through Memphis and down through to New Orleans fairly often. And we play Mardi Gras in New Orleans, naturally.
Are your hearts haunted?
Maybe. The name comes from the Johnny Lion's 50's rock and roll rockabilly tune, "Haunted Heart."
What do you hope people get from your band?
We started because we wanted to focus and shine a light on New Orleans hillbilly music, which was actually pretty big back in the 40's and 50's but seems invisible now. And we want people to dance.
Michael Hurtt and His Haunted Hearts on Myspace
Genre(s):
Blues, Country, New Orleans