Under the Influence of Danny Barker 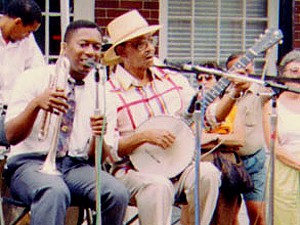 This week marks the centennial of Danny Barker’s birthday.  Born on January 13, 1909, this torch bearer of New Orleans music was a jazz banjoist, guitarist, singer, songwriter, and ukelele player.

Danny Barker moved to New York City in 1930, but he returned to his native New Orleans in 1965 to work at the New Orleans Jazz Museum.

In the early 70’s, Danny led a brass band called the Fairview Baptist Church Marching Band, which grew into the Hurricane Brass Band and helped launch the careers of many musicians, such as Leroy Jones, Greg Stafford, Darryl Adams, Lucien Barbarin, Wynton and Branford Marsalis, Tuba Fats, and Charles and Kirk Joseph, who eventually formed The Dirty Dozen Brass Band.

The Fairview Band provided a key link in the continuous chain of New Orleans musicians, and was pivotal in reviving brass band music.  Thanks to Danny Barker and those he mentored, brass music still flourishes today.

Update Required To play the media you will need to either update your browser to a recent version or update your Flash plugin.
Topic tags:
New Orleans Music, History