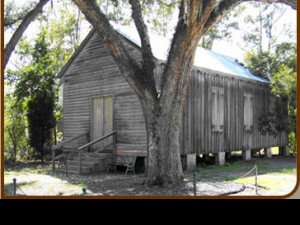 On May 5, 1885 a group of civic-minded African American residents of the village of Mandeville, led by the late Olivia Eunio, created the Dew Drop Social and Benevolent Association. A decade later the organization laid a cornerstone and in 1895 constructed a small wooden building on Lamarque Street in what is now called Old Mandevillee, 3 1/2 blocks north of the north shoreline of Lake Pontchartrain. The Association, like many created among African American residents following the end of the Civil War, had chiefly benevolent goals -- to care for the sick with food and attention; to provide help in funeral arrangements; to provide food for needy and temporary housing -- all during a period of time when black residents could not obtain various types of insurance. The hall on Lamarque Street, unpainted and nestled in a grove of ancient live oaks and elegant in its remarkable endurance and legacy, is now considered the world's oldest virtually unaltered rural jazz dance hall. It was built the same year that scholars now agree was the year of the birth of what is now called traditional jazz in New Orleans, city's then brand new musical genre and an enduring cultural gift from the Crescent City to the world. It was not long after its creation in 1895, that pioneer New Orleans jazz musicians were boarding steam boats in the entertainment district of Milenberg on the south shore of Lake Pontchartrain and coming across to Mandeville. By the early 1900s Mandeville was developing as a north shore lakefront resort village and black musicians were finding a receptive black audience for spirited Saturday night dances at the Dew Drop. During the 1920 and 1930s, according to oral histories, many collected by jazz authority Karl Koenig who now lives in California, the Dew Drop was a major hub for jazz musicians and legions of loyal fans. By the 1940s, black owned businesses were emerging offering insurance among other things and the social necessity for benevolent associations began to wan. By then original members of the Dew Drop Association had died and by early to mid 1940, the building was no longer in use. While it now occupies a precious page in jazz history as a performance venue, the Association built the hall for many purposes -- association meetings, community gatherings, parties and other functions. But it was also a sparkling center of musical activity for more than 40 years. Documentation reveals that among those playing at the hall on a regular basis was Buddy Petit, considered the premiere cornet player in early New Orleans jazz and many argue better than Louis Armstrong before Armstrong switched to trumpet and went on to create much of the enduring history of the musical form. But sharing the small stage inside the building were the likes of New Orleans jazz icons such as Kid Ory, Bunk Johnson, The Independence Band with brothers Lucien, Isidore, Louis and Joe Fritz (often called the Fritz Brothers Band), the legendary Buddy Mandalay on banjo often with Buddy Petit's band, Leon Lurent, Edmon Hall, Papa Celestin, Sam Morgan, Andy Anderson, George Lewis, the city's first of many legendary clarinet players, Klebert Cagnolatti and Tommy Ladner. Perhaps of most historical importance also is ample evidence that Armstrong played the hall before he left New Orleans and began taking jazz northward and eventually around the world and even up into the late 1930s and early 1940s before the hall closed when he needed a break from demands of his growing international celebrity and would spend time quietly with relatives on Jackson Avenue in Mandeville a short walking distance east of the Dew Drop. After the early 1940s when activity ceased at the Dew Drop -- replaced by a new organization and a new hall called the Sons and Daughters Hall on Marigny Avenue -- the now 113-year-old building has been virtually unused. However, in 2000 the City of Mandeville obtained the building as a civil donation from then owner Jacqueline Vidrine, a Mandeville businesswoman, who also sold the city the plot of ground on which the building stands. Later than same year the National Park Service, the New Orleans Jazz Commission and the George Buck Foundation, with the cooperation of the city, teamed up to present traditional jazz in the building for the first time in about 60 years. That historic event, featuring a modern day band of masters of masters of traditional jazz front by Dr. Michael White, played to a full house of touring English jazz fans touring the city as part of the Ken Colyer Trust. That concert led to release of a treasured CD. But fortunately, the re-emergence of interest in the long neglected historic treasure did not stop there. In August of 2006 two members of the Mandeville City Council, Zella Walker and Trilby Lenfant, led an effort to create the Friends of the Dew Drop and get the organization registered as a non-profit. That board, composed of citizens of the area with knowledge about musical history of the region and commitment and energy to make the old building a vibrant social, benevolent and educational force again, began meeting and planning in earnest by mid-2007. It produced three standing room only jazz shows in October, November and December of 2007 and is in the midst of planning for a full schedule of events in 2008 and beyond. Many who attend now attest to feeling spirits of former jazz greats who played in the building at the turn of the century and, with the large shutters thrown open and fans sitting on ancient church pew like wooden benches with a spirited jazz band crammed onto the small stage, it is easy to let oneself be transported in time back to the early years of America's most enduring cultural gift to the world -- traditional New Orleans jazz.