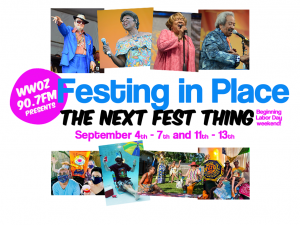 In April and May, millions of people worldwide “Fested in Place” with WWOZ. Back by popular demand, we will present a new 7-day virtual festival featuring classic live sets from New Orleans music legends past and present.

Pull out your festival shirts, hats, flags, chairs and get ready to celebrate the best of New Orleans music from your backyard, your front porch or your air-conditioned living room-- anywhere in the world.