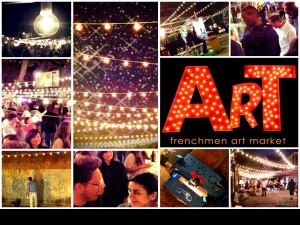 The Art Garage started as an idea during the run of The Frenchmen Art Market (New Orleans’ original open air night market). While working out the specifics for The Art Garage, Frenchmen Art Market was evicted so that the landlord could open his own art market on the property. While we were left feeling uncertain and disheartened, we also saw this eviction as an opportunity. We have watched the dynamic of Frenchmen Street change drastically over the last 5 years and the timing couldn’t have been better. With The Art Garage open, we’ve been receptive to all sorts of events including Shibari demonstrations, fire spinners, weddings, and art shows in addition to art markets. While an art market is not what the space will predominantly be known for, we do want to continue supporting the arts of New Orleans while also entertaining both traditional & nontraditional events. The Art Garage has adopted Frenchmen Art Market’s unique and funky vibe and aesthetically pleasing atmosphere. Our guests will quickly recognize our living room seating, telephone booth, gazebo, one of a kind bathtub and of course, signature string lights and chalk.

The Virtual Krewe of Vaporwave (VKV), New Orleans’ first and only virtual Mardi Gras krewe, will celebrate this Mardi Gras season by hosting the delightfully non-traditional “OwO: A Deep Internet Symposium,” a conference-style celebration and exploration of the hidden corners of internet culture. OwO: A Deep Net Symposium Saturday, February 15, 8 p.m. to 2 a.m at the Art Garage, 2231 St Claude Ave Advance tickets $20 online. $25 walkup tickets day of event. BOOTHS and VENDORS: OwO presenters will present snippets of internet culture in convention-style booths. There will be live demonstrations of internet phenomena such as unboxing, mukbang, and foot cams. Many of the booths and performers will be streamed online; all will be streamed live at the event. Art installations will include an authentic hikikomori dwelling, a multi-tiered Jell-O display, and a 20-foot wide projection scrim made out of underpants. Authentic pre-worn panties and socks will be sold from a barusera vending machine. All attendees will be eligible for convention “freebies” such as face painting, anime caricatures, temporary tattoos, and custom-printed waifu pillowcases. An on-site “NSFW Internet Cafe” will feature a public Chatroulette installation. PERFORMERS: Drag queen Eureeka Starfish will host the night. Live performances by internet pop-punk sensations Kawaii AF and underground queen Oblivia will spark the DJ-led lineup, which includes locals Nekostradamus and Maison Blanche as well as Corbo and Jillesque of the Los Angeles-based Vaporwave collective Chewing Foil. FOOD: Local taco truck Taco Cat will transform for one night into “Otaku Cat” and serve “Tendy Tacos,” an homage to the internet’s love for chicken tenders. COSTUME REQUIRED // LOOKS + INSPIRATION: This is a “Fursuit Forward” event. Active and prospective furries are encouraged to come in full fursuits. Other inspiration: Neckbeards, NEETS, Fedoras, Memes, Video Game Cosplay, Anime Cosplay, Mall Ninjas, Gamers Rising Up. KREWE HISTORY: Since its virtual debut in 2016, VKV has blossomed into a full-blown, real-life Mardi Gras krewe. In 2019 VKV re-activated the long-dormant Piazza D’Italia and screened Oedipus Max, the world’s first Vaporwave Rock Opera. In 2018, VKV collaborated with New Orleans Airlift to transform the Music Box Village into a satirical recreation of the 1984 World’s Fair dubbed “The World’s Unfair.” VKV’s 2016 Virtual Parade, the first virtual Mardi Gras parade in the history of the world, was screened at the 2016 New Orleans Film Festival. Advance Tickets Online: https://www.eventbrite.com/e/owo-a-deep-net-symposium-tickets-89783196959