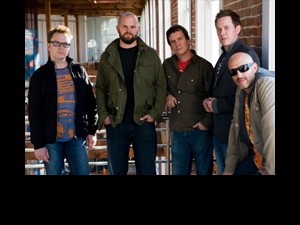 WWOZ will broadcast one of the hottest double-bills in New Orleans, Galactic and the Soul Rebels Brass Band live from Lafayette Square, presented by the Young Leadership Council as part of the YLC Wednesday at the Square concert series.

This five-man group is a quintessential modern-day New Orleans band -- and one of the funkiest outfits in the known universe. Consisting of drummer Stanton Moore, bassist Robert Mercurio, saxophonist/harmonica player Ben Ellman, keyboardist Richard Vogel, and guitarist Jeff Raines, Galactic was originally formed in 1994 as an octet (under the name Galactic Prophylactic). The band has shared the stage with acts including Live, Counting Crows, Allman Brothers, The Roots, Widespread Panic, B.B. King and Jurassic 5, to name just a few.

Blending the sounds of New Orleans brass bands, Mardi Gras funk, soft rock, reggae and hip-hop, this eight-piece ensemble has become one of the hottest dance bands in the Crescent City. The Soul Rebels began their professional debut with the Neville Brothers in New Orleans at Tipitina's. The Soul Rebels rocked so hard and so strong they continued opening for the Neville Brothers and beyond. The band's hard funk groove has landed them gigs as an opening act for: Bootsy Collins, A Tribe Called Quest, Better than Ezra, Counting Crows, The Fugees, Digital Underground, The Roots, Brand New Heavies, The Gap Band and Robert Plant & Jimmy Page, among many others.