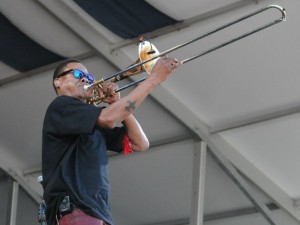 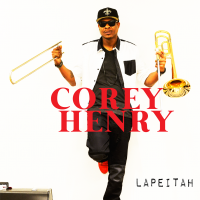 Corey Henry's latest, "Lapeitah," could not have come out of anywhere but Treme.

Lapeitah is my most anticipated album that I've covered in the new music spotlight series. This is a well-produced record from a talented New Orleans born-and-bred musician. It opens with a song with a quintessential New Orleans refrain, 'Tell Ya Mama Nem.' Love it. Henry moves strongly into the world of funk and hiphop crossover on 'Treme Lyfe' and the R&B/funk/rock-infused 'If 6 Was 9.'

'Baby C'mon' features the gravelly soulful voice of Cole Williams, a wonderful artist (and WWOZ volunteer). Henry shines on the second line celebratory song 'Keep Steppin'' and continues on 'Muddy Waters,' a recording that sounds like it came straight out of the 1970s. 'Feeling Tremazing' has a nice, easy feel, like hanging out on the porch with neighbors on a hot evening. Lapeitah closes with 'We Got The Funk,' led by the vocal stylings of Anjelika "Jelly" Joseph blasting it out of the park. See her recent performance with the Original Pinettes Brass Band at WWOZ here.

Henry's musicianship runs deep. His grandfather Chester Jones played bass drum in a traditional jazz band at Preservation Hall. His uncle is Bennie Jones of the world renowned Treme Brass Band. “Being in Treme was my biggest inspiration, being around all that music at once. We always had brass bands playing – the Pinstripes, Olympia, the Dirty Dozen. I’d go outside and they’d be playing a party or doing a second line. I got inspired by that and of course it’s in my family, my uncle and grandfather.”

As a result of this unique environment, Henry didn’t learn his craft in the school band the way many other brass band musicians in New Orleans learn. Treme was his music classroom; family members and neighbors on every block were his teachers. “I always had people like Tuba Fats giving me tips on what I needed to do during gigs; Freddie Kemp, sax player with Fats Domino; also Stack Man, Frederick Shepard, Roderick Lewis. They all lived in the neighborhood and played with the Treme Brass Band.

Henry began his life as a musician on the snare drum but switched to trombone at age 10. At 16, his uncle felt he was ready for the Treme Brass Band, so he joined that New Orleans institution as a young man. “He just threw me in the mix with all those bad musicians, said ‘This is how you gon’ learn. Just go for it.' Showing him the ropes along with his uncle was trumpeter Kermit Ruffins. “They put me with a lot of musicians who were phenomenal, taught me a lot about stage presence, how to conduct yourself, coming to gigs on time.”

Henry took over Kermit's longstanding Thursday night gig at Vaughan's a few years ago. Corey Henry & the Treme Funktet can be seen there every Thursday night, 10p-close.

Lapeitah is available on MP3 and CD from iTunes, Amazon, and the Louisiana Music Factory.