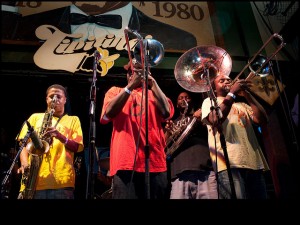 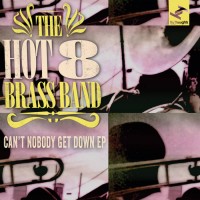 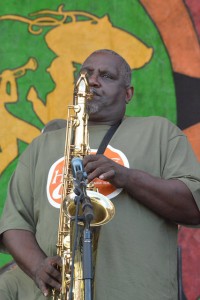 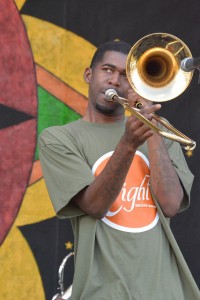 The story of the Grammy nominated Hot 8 Brass Band is one of trials and tribulations, but also of triumphs over adversity and a determination to continue on. Over the past 20 years, the band has carried on despite Hurricane Katrina, a band member losing both of his legs in a car accident, and the deaths of four band members.

2016 has been a big year for the veteran brass band as they celebrate 20 years and have toured the UK. Tru Thoughts Records produced a 10-minute mini-documentary on the group (view it below), and released a 6-song EP, Can't Nobody Get Down. The EP opens with its title track and the refrain "can't nobody get down/like the Hot 8 get down." Truth!

The Hot 8 drummers fly on 'Take It To The House (20th Anniversary Version)' and Wendell "Cliff" Stewart's saxophone skills are on fine display in 'That Girl.' The band fits a lot on this EP-- the first three songs are all over six minutes. They're followed by two remixes of their now nearly iconic version of Marvin Gaye's 'Sexual Healing,' including an ethereal, almost disco-esque mix from Roy Cooper featuring Smadar.

Hot 8 and WWOZ have had a lot of love for each other over the years, and the band recently returned to our studio to perform 'Take It To The House' live on the New Orleans Music Show with DJ Nita K. See that appearance below (first player).

You can also learn more about the Hot 8's deep history from a recent episode of New Orleans Calling, when host George Ingmire sat down with tuba player Bennie Pete, the leader of the Hot 8 at the Howlin Wolf in New Orleans, where the band holds down a weekly Sunday night gig when they’re not on tour. They talk about everything from the early days of the band, rehearsing for a neighborhood audience in Shakespeare Park uptown, to how they established themselves in the city’s blossoming brass band scene.