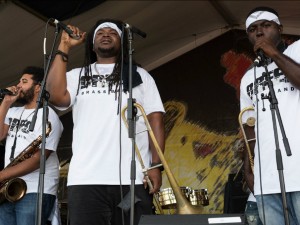 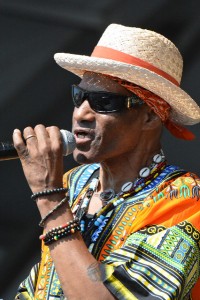 Essence Fest is nearly upon New Orleans again, this year happening Thursday, June 30 through Sunday, July 3. Essence brings some of the top names in R&B, hip-hop, jazz, blues, and more to the Crescent City each July as the nation's premiere contemporary African American music and culture event. A number of local performers are always included in the lineup, and this year is no different.

Poet, musician, activist and artist, Cyril Neville began his career beside his siblings, turning pro at age 19. He’s the voice of the Grammy Award-winning Neville Brothers and The Meters, known for smash hits, "Cissy Strut," "Cabbage Alley" and "Fire on the Bayou." Today, he tours over 30 countries each year with all-star band, Royal Southern Brotherhood, and his dedication to New Orleans musicians who paved the way for him shines through every performance.

Founded in 1961, the Preservation Hall Jazz Band derives its name from Preservation Hall, the venerable music venue located in the heart of New Orleans’ French Quarter. The band travels worldwide fulfilling their mission to nurture and perpetuate the art form of New Orleans Jazz. Many of the bands’ charter members performed with the pioneers who invented jazz in the early twentieth century including Buddy Bolden, Jelly Roll Morton and Louis Armstrong. Regardless of whether they are releasing new material or old or performing at the New Orleans Jazz and Heritage Festival, Bonnaroo, Electric Forest, Carnegie Hall or for the King of Thailand, Preservation Hall Jazz Band embodies a joyful, timeless spirit that can’t be ignored.

Charles Belonge aka Dj "Bam Bam" Belonge definitely rocks the party! This New Orleans native is a legend of the city’s radio and nightlife entertainment scene. For years, he has energized audiences before such names as Alicia Keys, Steve Harvey, Chaka Khan, Kem, Queen Latifah, and many more, and can be found performing at many of the most prominent and upscale weddings, corporate galas, and celebrity and socialite events in New Orleans and the region.

Lester Love serves as the Pastor of The City of Love in New Orleans, Louisiana and Executive Secretary for the Full Gospel Baptist Church Fellowship. He travels across the country presenting leadership sessions for ministries and corporations. His motivational mantra "ican.iWill.iMUST!" encourages us to maximize our potential. Love’s many talents also include singing. He hosts events for Super Bowl, the All-Star Game and has garnered millions of views for his “Love Songs” YouTube clip.

Church Friends, a group of friends who met through church, is made up of singers and musicians from New Orleans, Louisiana. "We always ended up together, either performing, supporting, or simply as friends. It only made sense to do together, what we do best, make music..." said George Potts Young, the founder. GPY and Church Friends, have collectively shared the stage with Grammy-award winners Aretha Franklin, Fantasia, New Kids On The Block, and Kirk Franklin, just to name a few! They've also appeared in films and TV shows, including "Memphis Beat", "The Campaign," and "When The Game Stands Tall."

The 61st Mayor of New Orleans.

Tyronne G. Foster and the Arc Singers is a community choir from the great city of New Orleans, Louisiana. This choir has been singing God’s praises for 29 years. They have traveled internationally, performed at the New Orleans Jazz and Heritage Festival, ESSENCE Festival and did a live recording for the New Orleans Saints. On January 17, 2016 this great choir did their very first live recording at the Beacon Light International Church. One thing is for sure about Tyronne G. Foster and the Arc Singers, they love giving God the praise and they know He is not through with them yet

With a mixture of spoken word, zingy theatrics,  and soul rousing music Tank and the Bangas have no problem going against the grain of what traditional New Orleans music is supposed to sound like.  The Bangas create the perfect compositions for front lady Tank to take you somewhere.  Going from the heart felt sunken words of spoken word to front row at a rock concert you'll be sure to experience what fans can only describe as "The best roller coaster I've ever been on."

Josh Kagler is a man of many musical talents. As a singer, songwriter, and choir master, the New Orleans native has sung background for several main-stream gospel artists. Notably, his group Harmonistic Praise Chorale were the 2013 winners of The Verizon Wireless "How Sweet the Sound" Southern Regional Choir Competition and features on Oxygen Networks reality show "FIX MY CHOIR" featuring Grammy winning Destiny's Child Michelle Williams and "Preachers of LA" Deitrick Haddon.

Plus, a few more with close ties to New Orleans (or WWOZ):

The Fort Worth, Texas native and Columbia Records singer songwriter and R&B artist, Leon Bridges is currently enjoying a wolf out headline tour. The tour comes on the heels of his Grammy nominated debut album Coming Home, featuring breakout singles "Coming Home", "Better Man” and "River" which he performed on Saturday Night Live.